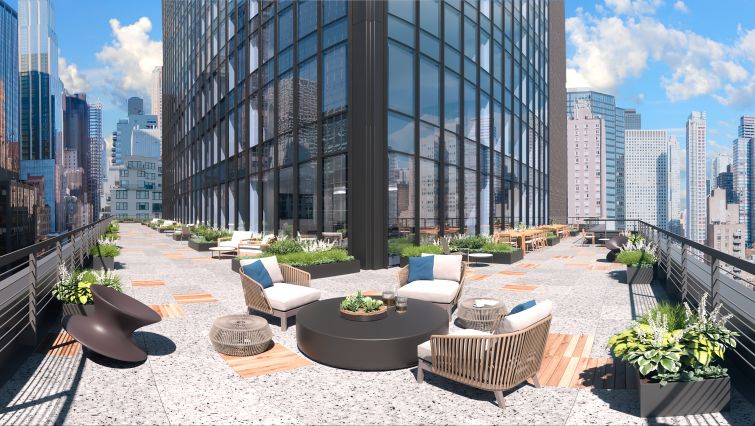 In the largest of the three deals, Beveridge & Diamond inked a 12-year deal for 11,054 square feet on the entire 16th floor of the 40-story Midtown tower. Asking rent was between $90 and $95 per square foot, according to tenant broker Zev Holzman of Savills.

The company plans to relocate from its current 13,822-square-foot digs at 477 Madison Avenue early next year, and its new space will allow Beveridge & Diamond to fit its same offices in a smaller footprint, Holzman said.

“[Beveridge & Diamond] are laying out their space more efficiently; the space they were in was an older build out so it wasn’t the most efficient layout,” said Holzman, who worked on the deal with colleague Gary Stein. “They also liked the fact that 825 Third Avenue was a new redevelopment, and they liked the amenity package that the building offers.”

Just above Beveridge & Diamond, financial technology adviser Liminal signed a deal for 5,500 square feet across half of the 17th floor, according to Durst. It plans to relocate from the 11th floor of 215 Park Avenue South before the end of the year.

Liminal will neighbor U.S. mutual fund investor Gotham on the other 5,500 square feet on the 17th floor, after Gotham relocates from the 30th floor of 535 Madison Avenue in the next few weeks, according to Durst. Both Gotham and Liminal wanted to move into the building as soon as possible.

“For both Gotham and Liminal, we are completely providing turnkey space that they can move right into,” said Durst’s Ashlea Aaron, who represented the landlord in-house in all three leases with Tom Bow, Lauren Ferrentino and Bailey Caliban, said. “They wanted to be in the building quickly and we were able to accommodate them.”

Both Liminal and Gotham’s leases were for roughly five years, according to a source with knowledge of the deals. Asking rents ranged from $78 to $98 per square foot, according to Durst.

Savills’ ​​Brandon Cooperstock represented Liminal while First New York Realty’s Eric Kahn brokered the deal for Gotham. Cooperstock, Kahn and spokespeople for Liminal and Gotham did not immediately respond to requests for comment.

Other tenants at the tower between East 50th and East 51st streets include the National Bank of Egypt on the 34th floor and Toyota Group’s U.S. procurement business Toyota Tsusho America.