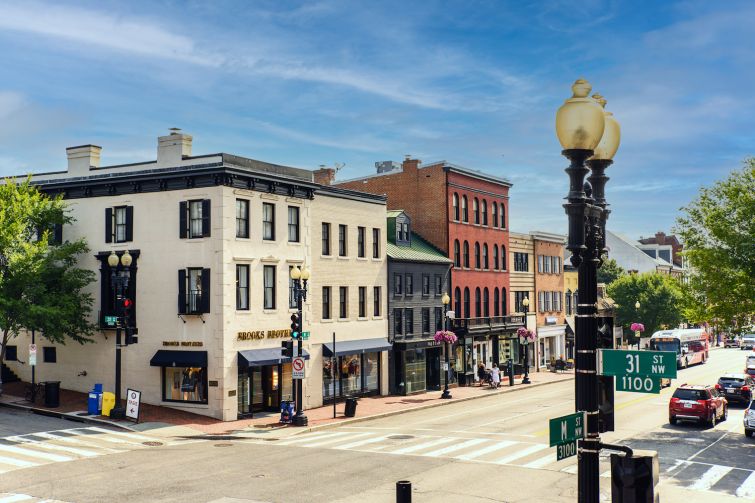 Showfields, a New York-based store that mixes retail shopping with art and theater, is expanding to Washington, D.C.

The company, which has locations in Manhattan, Brooklyn, Los Angeles and Miami, has inked a 10-year, 20,300-square-foot lease at 3077 M Street NW in Georgetown with landlord EastBanc.

The store will open officially on Dec. 8. Showfields’ three-story space is organized into departments, each representing a room of a house, following the brand’s House of Showfields concept.

The building was  constructed around 1800 and underwent a complete renovation in 1999, which included the installation of an open staircase overlooking the lower level. Brooks Brothers was previously in the space but closed up shop in 2020 after nine years.

“This store is a great example of how we approach the future of retail — we can take a heritage retail space, rework it, and create an entirely new environment that’s wholly unique but at its core nostalgic for a classic shopping experience,” Tal Zvi Nathanel, CEO and co-founder of Showfields, said. “We reused a lot of the existing infrastructure of the previous store; for us it was important to reutilize and rework as much as possible while introducing D.C. to our signature aesthetic.”

Since Brooks Brothers departed, EastBanc has used the space as a retail incubator dubbed Concept 31/M to help smaller companies to set up shop in Georgetown. Products from one of those companies, jewelry maker Viva Vida, will soon be sold through Showfields.

“The EastBanc team was inspired by Showfields’ approach to retail when we launched Concept 31/M, and I believe it was the success of that creative strategy that drove Showfields to open a location in Georgetown in the very same space,” Philippe Lanier, EastBanc’s principal, said. “Now as Showfields prepares to open its doors, we’re thrilled that they’ve chosen to bring in locally based small businesses like Viva Vida, which was a part of Concept 31/M.”