Commercial real estate could’ve had one of its own in charge in Rick Caruso, but the billionaire has called on the city to rally around the mayor-elect 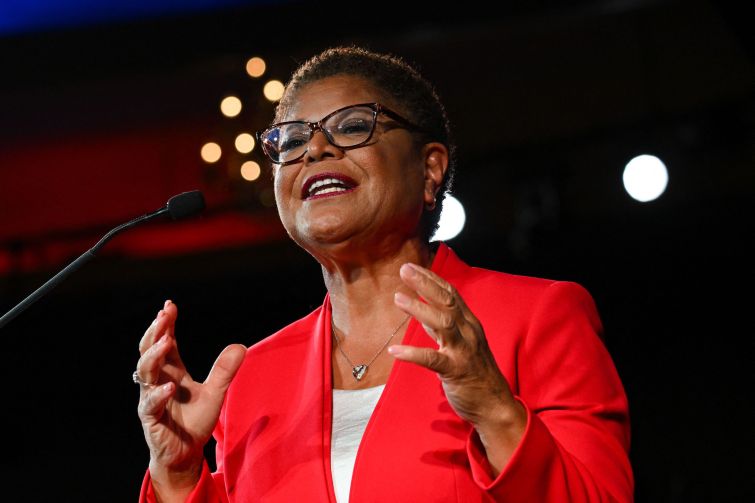 Congresswoman Karen Bass is the projected winner of the Los Angeles mayoral race over billionaire developer Rick Caruso in a contest that focused on the seemingly hopeless homelessness crisis, as well as rising crime rates and the handful of recent scandals that totally rocked City Hall and upended trust in government.

Notably, the two most significant transgressions the past few years involving elected officials included real estate developers and a former council member in charge of the city’s powerful land use committee using that role as a “a money-making criminal enterprise;” followed by a City Council president resigning after a recording leaked in which she and other high-ranking officials made racist and disparaging comments, and apparently schemed against others to maintain political power.

With a new administration comes new hope for broader transformation, and the expectation for new action in addressing the city’s most dire issues. The homelessness crisis permeates throughout the region, and crimes like robberies are on the rise. Both candidates prioritized supportive housing over all else, and Bass said her first order of business will be to declare a state of emergency for the homelessness crisis, opening up additional funding sources.

“We are going to solve homelessness,” Bass tweeted Wednesday night. “We are going to prevent and respond urgently to crime. Our city is no longer going to be unaffordable for working families. And know this — that work has already begun.”

Edgar Khalatian, a partner at Mayer Brown’s Los Angeles office and leader of the firm’s land use practice, said Bass’ victory speaks to the electorate’s confidence in her ability to truly address the homelessness problem.

“I think Karen Bass’ support came from the belief that she has the tools and the relationships necessary to solve the problem,” Khalatian said. “The tools are her background as someone in the health care profession who understands homelessness, who understands mental illness; because so much of our homelessness issue is really a mental health issue. And she has and will be able to leverage relationships in Washington, D.C., to get the dollars necessary to build the shelters and to provide the mental health services that people need.”

Peter Belisle, JLL’s market director for the Southwest, said “there’s a roadmap where Bass could be successful and viewed by the broader business community as positive.”

“It’s just going to come down to if she can produce results, or if it’s going to be more of the same old stuff,” Belisle said. “If we go on what Bass has said, and the positive assumption that she’s going to follow through, I think that is positive for commercial real estate.”

Khalatian said Bass is great at bringing people together for such issues, and her administration brings a reset for the city, and a chance to examine its priorities on housing.

“I hope she reaches out to a lot of the competent people that were working for or helping Rick Caruso, and brings them into the fold,” Khalatian said. “And I think that’s the kind of person she is.

“Karen has the chops,” he added. “She’s going to do well for the city. And folks need to give her the time and assistance she’s going to ask for. … I’m happy we have a unifier. I think we would have had a unifier with either one of these candidates. … It’s going to help heal the city. And a healed city is better for developers. Nobody wants to invest in a broken city.”

In a concession statement, Caruso said “there will be more to come from the movement we built,” but he called for the city to unite around Bass and give her the support she needs. Caruso, one of the most powerful figures in commercial real estate in Southern California, started out with an early lead in the initial count from in-person voting last week, but then the mail-in ballots largely favored Bass. Caruso reportedly spent a record $100 million on his campaign, and differed from Bass with promises to expand the police department.

Members of the development community surely favored the idea of having one of their own leading the city in terms of business and development. But Belisle noted Bass will likely recognize that more than 45 percent of voters selected Caruso over her.

“If you think those people are just going to disappear into the ether, no way,” he said. “I think (Bass is) going to have extra pressure on her given how far Caruso went, and the result was not a landslide like [the one seen in the California governor’s race]. So the fact that she’s going to be aware that almost half of the constituency didn’t vote for her, and if she can help some of the issues around homelessness and crime, I think she’s got a real opportunity to reach an even broader base. … Everybody from both sides of the fence wants to see homelessness and crime addressed. While I’m disappointed to not see Caruso in that role, that doesn’t mean we won’t see a positive outcome.”

Bass, who was on President Joe Biden’s short list for vice president, was backed by Biden as well as Vice President Kamala Harris and much of the Democratic establishment. Outgoing Mayor Eric Garcetti said he has “already been preparing with my team to make this the smoothest transition of administrations in our city’s history — so that our transfer of power can stand as a testament to the values and unity of purpose that have always made me proud to lead this City of Angels.”

The L.A. County Registrar-Recorder/County Clerk’s office is expected to certify the results on Dec. 5, the Los Angeles Times reported.