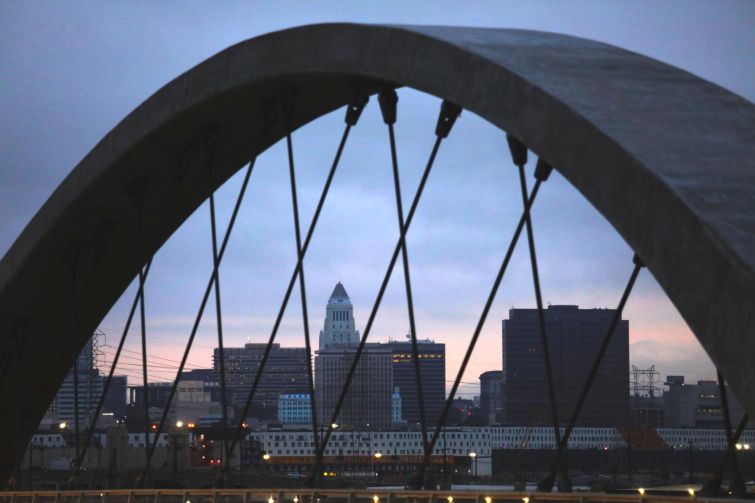 City Hall is framed by one of the arches from the new Sixth Street Viaduct in Los Angeles. Genaro Molina / Los Angeles Times via Getty Images

Los Angeles City Hall was rocked over the weekend after the leak of an audio recording of a private conversation between four high-level officials that included a barrage of racist and disparaging comments specifically about colleagues and about communities of Angelenos in general.

Almost every other member of the City Council has called for resignations but also iterated they currently do not have authority to remove the three members on the recording — Nury Martinez, Kevin de León and Gil Cedillo. Martinez stepped down from her role as council president on Monday, but she maintains her position as a member of the council. Ron Herrera, president of the L.A. County Federation of Labor, who was also part of the recorded conversation, resigned Monday evening, the L.A. Times reported.

The City Council will convene for the first time Tuesday morning since the recording was released. The 15-member council has final say on entitlements for all major real estate projects as well as local housing and rental laws.

The fallout from the recording comes nearly one year after a federal grand jury accused Councilman Mark Ridley-Thomas of accepting bribes from USC, and about two years after two former councilmen were indicted for taking bribes from real estate developers and creating “a money-making criminal enterprise” out of the city’s entitlements process. (Kevin de León was selected to replace the leader of said enterprise, Jose Huizar).

The current scandal also comes one month before a major election in which the mayor’s office and several council seats are up for grabs.

The leaked audio recording of three Hispanic council members, which was originally posted on Reddit, involves a closed-door discussion from October 2021 centered around the council’s redistricting process. The discussion was riddled with xenophobic and racially charged comments about colleagues; about one colleague’s Black son; about Oaxacans living in L.A.’s Koreatown; about other city and county officials; and more.

During the conversation, Martinez ridiculed Councilman Mike Bonin, who is white, multiple times. Most notably, she said Bonnin carried his young Black son like an “accessory,” and described the child in Spanish as “parece changuito,” or “like a monkey,” the L.A. Times reported, while De León jokingly compared the boy to Martinez carrying her luxury handbags. De León also derided Bonin as the City Council’s “fourth Black member,” in a jab for his support for Black members of council.

Martinez also mocked Oaxacans living in L.A.’s Koreatown, and complained that District Attorney George Gascón is “with the Blacks,” among other comments about other elected officials that were focused on race.

A tidal wave of civic leaders from around Southern California have called for the council members’ resignations, including Mayor Eric Garcetti; members of Congress; state legislators; other council members; the two mayoral candidates — Karen Bass and Rick Caruso — along with a growing list of prominent organizations and labor groups.

Martinez, who was the first Latina council president in L.A.’s history, issued a statement Sunday apologizing for her comments, and another on Monday reiterating her sorrow, adding that she was stepping down as council resident.

De León’s statement said his comments were “wholly inappropriate.” Cedillo also issued an apology for being present during the conversation, but maintained that he didn’t make any racist or disparaging remarks in the recording.

The event will permanently alter the face of L.A. City Hall for the foreseeable future, particularly considering the offices of mayor and city attorney, as well as at least four City Council seats, were already up for grabs in the upcoming election before the recording leaked.