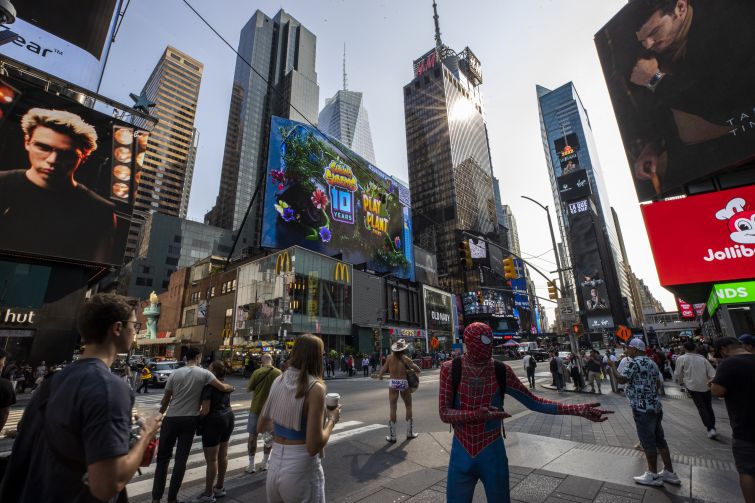 SL Green Realty and Caesars Entertainment are looking to run the table in Times Square in a bet to win one of New York’s downstate gaming licenses, after SL Green lost its original casino partner Hard Rock Cafe.

The firms are proposing redeveloping 1515 Broadway into a casino and are sweetening the pot by offering the city and state investments in security, traffic mitigation and mass transit improvements, SL Green and Caesars announced Thursday morning. The plan was first reported by the New York Times.

SL Green was originally planning to partner with Hard Rock to redevelop 1515 Broadway into a casino — and the two companies were holding meetings with elected officials earlier this year to push the plan forward — but Hard Rock bailed to focus on a casino near Citi Field in Queens, leaving SL Green “scrambling” to find another partner.

Now SL Green has formed a joint venture with Caesars to put a Caesars Palace at the Crossroads of the World. The pair have been trying to get local eateries, retailers and construction companies to help secure one of the three gaming licenses approved by the New York State Legislature earlier this year, according to the Times.

How much SL Green and Caesars plan to invest in the project and what they have in mind for 1515 Broadway’s redevelopment have not been revealed, but it’s clear they plan to make use of the existing structure. A spokesperson for the joint venture said the details will likely be dictated by a request for proposals to be released by the state in December or January.

“Our approach will ensure that under-represented communities benefit both in terms of employment and investment opportunities,” Marc Holliday, the CEO of SL Green, said in a statement. “A casino in Times Square is in keeping with existing uses in the area. Times Square is the center of the entertainment universe. Because we are proposing a renovation, once the license is issued, we can open quicker than other facilities, which require entirely new construction, changes in law, and will be disruptive to their local communities.

Caesars Palace Times Square would also have theater space for “The Lion King” on Broadway to continue holding court at the new development, which Caesars CEO Tom Reeg believes will give the already recovering tourism industry a leg up after the pandemic wipeout.

Caesars and SL Green aren’t the only ones competing for the limited number of downstate casino licenses being issued by the state. Related Companies and Wynn Resorts announced in mid-September they want to build a casino resort on the undeveloped western section of Hudson Yards. And there’s plenty of others eyeing other Big Apple gambling dens to join Resorts World New York City in South Ozone Park, Queens, currently the only casino in the five boroughs.

Vornado Realty Trust wants to open a resort near Herald Square, Morris Bailey is looking into one at the former McAlpin Hotel, and both Thor Equities and John Catsimatidis are floating the idea of casinos in Coney Island, Brooklyn.