Its founder and CEO, David Menaged, talks about the approach and the challenges it faces 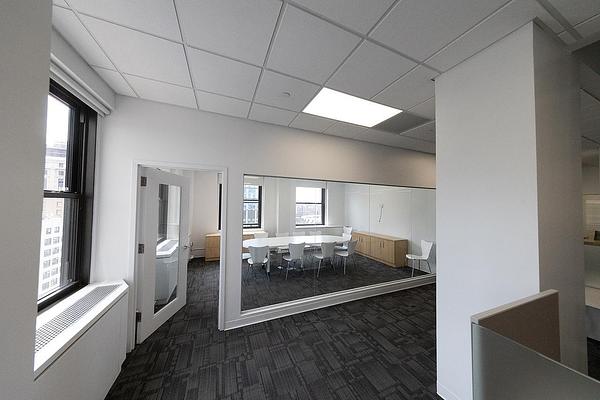 The impact of the pandemic on coworking could be described as throwing it against the wall and seeing what concepts survived the impact and in what form.

B.C. (before COVID) there was basically one kind of coworking, a place where you could take your startup and mingle with other startups, though a few coworking companies tried to offer turn-key offices. Then you saw more established companies trying to get in on the coolness and seek spots for their people. Think IBM leasing 70,000 square feet for a time from WeWork at 88 University Place.

A.D. (after disease) it seemed there were more concepts than companies. Industrious stressed turnkey space for small startups to call their own. There was Daybase, providing spaces in the suburbs and the commuter towns where satellites could happen — or where people who wanted to get out of the house but not come all the way into the city could ply their trades.

Even the company most identified with the trend, WeWork, changed with the times. In May, WeWork’s global head of real estate, Peter Greenspan, told Commercial Observer the company was working to provide a diversity of products, rather than one size fits all.

Here comes yet another spin on the flexible office product. Manhattan-based Trot, founded in 2020 and officially launched in June, aims to be the Airbnb of offices, taking advantage of workspaces not being used and putting them in a central place online, to be rented for much shorter than the typical commercial lease, which start around five years and can run out to 30 years. Trot owns no offices nor does it manage them. All it does is let the public know they’re available.

According to a spokeswoman, 30 listings, or about 41 percent of the total, are furnished.

Trot’s founder and CEO, David Menaged, took some time a couple of weeks ago to explain Trot and how it works. His remarks have been edited for length and clarity.

Commercial Observer: Tell me what Trot is and how it differs from other coworking companies.

David Menaged: Sure. Trot is an online marketplace. People can completely communicate on Trot with one another. That’s owners and renters and brokers with owners. They can also transact on our platform. All the agreements are streamlined, signed on platform; there are no papers exchanged.

It’s a platform for owners to list their commercial spaces. Listings are free. There are pictures, there are plans. There are virtual walkthroughs of each of the spaces, full descriptions of it. And renters come — we call them trotters — they come to the platform, they can browse the market, they can chat with owners, they can arrange for in-person viewings of whatever space they’re interested in. And they can actually come back and sign licenses for the space for three-month intervals.

How many markets are you in, and what are those markets?

We’ve got 20 buildings officially on the platform right now. We’ve got another five buildings in the onboarding process, where we’re doing photography, plans and data points. And we’ve got agreements out with other owners, collectively, on probably 20 buildings, but it’s 10 different owners. Also New York City.

So, as I understand it, there’s no actual branded Trot space. These spaces still remain basically the landlord’s space. So it’s different from WeWork. When you go to a WeWork, you go to a WeWork outlet. You strive to be more of an Airbnb model.

That is very correct. We’re an online marketplace for owners and users to transact in a way they haven’t done before. The current market that’s out there, that’s been sort of delivered to the world, were third party operators. They could be a space that was actually rented by the third party operator from an owner. Or it could be a company that’s doing a management agreement with ownership. But those spaces are branded as that operator.

Whereas, with Trot, we’re not an office space solution, per se. We’re a digital platform where the existing players in the given industry will continue to do business as they have in terms of just structure of the transaction, but just in a very new way that they’ve never done before.

And we really streamline the flex industry. It keeps the power, so to speak, where it’s always been since time immemorial. Which is with owners, with renters and with brokers.

Where do you see yourself going in a couple of years, or where do you at least hope to go?

I would hope that we’re going to be in the top 20 markets in the U.S. and the surrounding areas, within two years from now.

This is really a streamlined solution. So in terms of local on-site infrastructure, for us to scale the model, there’s really not a whole lot. There are some positions we will need. But we’re never building a space. We’re never actually furnishing a space. We’re actually relying on the existing players to do what they do best, which is run their properties.

So, in terms of scaling, it’s really just getting the word out there and showing the owners and the renters that this is the way that they should be renting short-term office space. Once that happens, our hope and prayer is that this catches like wildfire and that we’re coast to coast, in the top markets and surrounding areas.

How does Trot work and how does it make money?

We have a performance-based model. We don’t charge for listings. We don’t ask owners to commit their listings specifically to Trot. That is, they could continue to market for whatever long-term deals that they currently market for, with their agents, so completely undisturbed. And when a trotter comes to the platform and rents a space, we take a fee, which is 10 percent.

We believe that flex space and short-term office space needs to be another tool in the shed of the owners.

How does Airbnb play into this? It seems in some respects you’re applying an Airbnb model, and some of your PR actually does say that. So how do you compare what you do with what Airbnb does?

It could be Airbnb or any of the other platform businesses that have revolutionized their given industries. We hope to be similar to Airbnb in that it’s a short-term rental space, whether that might be for vacation homes or for dwellings in every city across the globe.

That brings it home because that’s such a famous company. So, by making that correlation, we’re able to show how we’re different from the coworking operators that currently are in the market. How does Airbnb play into it? I don’t know. I hope I aspire to be as successful as those guys. And as revolutionary as them. I say hats off to them.

You see a difference between flex space and coworking. Talk to me a little bit about that.

Sure. So coworking is a type of flex space. Coworking is your typical WeWork or Industrious where you go into the space, the space is beautiful. They have their share of open plans, they have passes so you can invariably find people sitting in the social areas, like in booths or in the pantry or somewhere around there. And they’ve got this set of private offices. So, even though they’re from different companies, they’re sort of your coworkers in a sense, because you’re with them.

Up until this point, there really have not been private suites. There have been some, but it hasn’t really exploded in the market — private suites on a flexible basis. And I think that’s the true growth in flexible offices, because I believe that a lot of people out there still do want their own offices. There are people that want to be in coworking places, and it’s great to develop a little bit of a social network; and, maybe after work, making friends, there’s definitely a benefit to that. I’m not here saying that that has no place in the market.

I just believe that the vast majority of people are private about their businesses, and they want to be in their own space.

So you see the market evolving, and it’s probably going to keep evolving.

I would say it’s not even the market that it was two years ago. What everyone in the world saw — and I think this is without exception — is that the world changes on a dime. You know, when maybe it was March 13 or 14, 2020. And then March 15 or 16, everything was different. So people realized the value in flexibility and being able to turn on a dime. Whether it was people leaving cities that were in severe lockdown, to go to warmer climates like Florida that were not as locked down. Or whether it was businesses that had the rights to terminate their lease, so they had some element of, quote-unquote, flexibility rather than the people that were stuck in a 10-year deal.

So, yes, the market has evolved, and I believe it will continue to evolve. It’s just a sign of the times.

We may not be out of the woods. Interest rates are continuing to rise, and there are a number of economists who are predicting a recession and a reversal in the kind of low unemployment numbers we’ve been seeing. Do you see the market for your business just going straight up? Or are you looking at rougher times for yours and other businesses?

I think rough times just present their set of challenges. There are challenges at every point in time.  From our standpoint, we’re an expense-light business. We’ve got some 200,000 feet on platform with another 100,000 feet on the way. We can run very, very similar expenses, and have 2 million feet on platform. So we don’t have these big maintenance bills and debt that we’re servicing to be transacting on such a large pool of space. In terms of our business, I think it’s actually a very healthy model to weather challenging times.