The pandemic pummeled the vendor model. Will it succeed now? 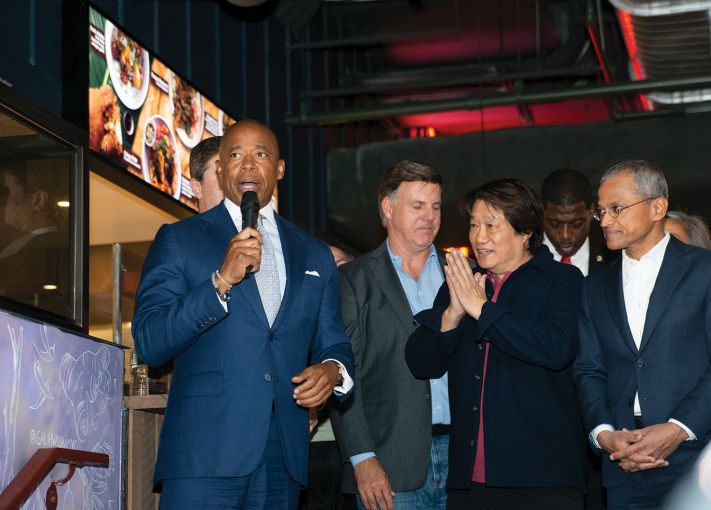 As if it were recovering from a long (in this case, two-plus years) illness, New York’s appetite is finally back.

In September, New Yorkers nabbed two new food halls, in Midtown with the Singaporean Urban Hawker and in the Seaport District with the Tin Building. And that’s not even counting the tasting menu of other food halls that emerged over the last year, such as Urbanspace’s downtown outpost at 100 Pearl Street, or the Moynihan Food Hall that opened on the Far West Side. Together, the projects mark a resurgence in the food hall’s invasion of New York City — one cut short two years ago by the COVID-19 pandemic — though not all eateries are back, or better than ever.

During the last 10 years, food halls served as an easy win for landlords looking to lease out large swaths of space all at once. Food halls offered low barriers to entry for new entrepreneurs (vendors can spend up to seven figures opening a restaurant, while a food hall stand is unlikely to cost more than $50,000); healthier, more diverse eating options for customers; and near-guaranteed foot traffic — “near” being the operative word.

Remote work still bodes ill for the food hall industry. These eateries operate on their own food chain — without office workers grazing the grounds on weekday afternoons, financial survival becomes much harder.

“We’re really in the beginning stages of seeing how all of this plays out in the long term,” said Chase Welles, a partner of SCG Retail. “If there aren’t as many people around, obviously it’s not going to be as good for the five meal periods of the week, but maybe those guys will evolve into creating a few more day parts for themselves. … If there are, in fact, fewer customers, those particular venues will have to do something to create the same volume, and they will.”

Foot traffic at New York City’s food halls has rebounded as tourists return, workers trickle back into the office, and state and city governments lift COVID-19 restrictions. Chelsea Market — part food hall, part bazaar — went from 47 percent fewer visitors in January 2022 compared to January 2019, to 27 percent fewer visitors in August 2022 compared with the same month in 2019, according to data from foot traffic firm Placer.ai. Dekalb Market Hall, the largest food hall in Brooklyn, and The Hugh Food Hall in Midtown both now see about 80 percent of their pre-pandemic business transactions, according to owner Anna Castellani, who also runs the all-day restaurant and marketplace ANA Bar & Eatery in Hudson Yards.

The pandemic cut Castellani’s business to zero in Brooklyn and Manhattan, and she lost 10 vendors at Dekalb Market after it shuttered from spring to fall 2020. But she lost no vendors in the Hugh, though that venue remained closed until October 2021, she said. While business isn’t completely back, food halls are a concept proven to succeed, especially in residentially dense Brooklyn where the market is “on fire,” Castellani said.

“I think the success of a market hall is really location-based, and there has to be a good amount of heart in it,” Castellani said. “A lot of developers were thinking about the food hall as a base to many of their developments, and looking at it just as a leasing strategy, and I don’t think you can do that.”

“Heart” is difficult to quantify. Take famous French restaurateur Jean-Georges Vongerichten’s latest project in the Tin Building. Vongerichten and his development partner, the Howard Hughes Corporation, teamed up in a joint venture to operate 20 restaurants, markets and a hidden House of the Red Pearl restaurant at the Tin Building in Manhattan’s Seaport District.

At its Sept. 28 opening, guests consumed lemon pizza and chocolate-dipped churros while they oohed and ahhed at the parade of dancing “chefs” (paid actors dressed in chef’s whites) lugging a giant metal fish skeleton from the New York Stock Exchange to the Seaport property. As Vongerichten cut the thick green ribbon to open the Tin Building (weeks after its soft launch in August), his enthusiasm was infectious.

“We’re very happy to be part of the rebirth of downtown Manhattan,” Vongerichten told Commercial Observer. “After [Superstorm] Sandy, the Seaport was kind of a disaster. And now we’re part of its rebirth.”

With a $194.6 million price tag, and an unknown amount of cash dropped on the glitzy opening — equipped with a fish-shaped margarita ice luge, live swing band and women on stilts lugging trays of gold leaf-covered caviar — the project better bring in some serious cash. Vongerichten said it can take anywhere from two to 10 years to break even on a restaurant, depending on the economy. Howard Hughes’ Saul Scherl was optimistic that his firm’s overall investment in the Seaport — which includes a planned 26-story apartment, office and retail tower at 250 Water Street — would be a financial success.

“We feel very good about the preliminary feedback we’ve gotten on the market hall,” Scherl said. “Overall what we’re trying to create is a destination. … It’s not the pieces, but the pieces that make the whole that will enable us to generate a strong return on our investment.”

Eleven of the 17 restaurants collected in the 15,000-square-food hall have never before opened in the U.S. Urbanspace’s Sept. 27 opening was nearly as star-studded as the Tin Building’s, with Mayor Eric Adams and Singapore Hawker’s curator K.F. Seetoh in attendance.

Still, without a full return to office, food halls will feed off a smaller segment of customers. Remote work will likely shift new food halls into residential districts, Trip Schneck, an executive managing director of C&W’s specialty food and beverage unit, told CO. But, even in office areas, food halls may be in a better position than restaurants to weather disruptions to their customer base, from the pandemic to remote work, thanks to the halls’ ability to pivot from in-person dining to delivery — without the heavy rent burden most restaurants face, Schneck added.

Schneck and Phil Colicchio, another C&W executive managing director and a cousin of celebrity chef Tom Colicchio, are even working on a hush-hush plan to convert an office property with a food hall base tenant into a residential tower, though the two wouldn’t divulge any of the tasty details.

Overall, the two were confident that New York City wasn’t full up on food halls yet. About 14 food halls have opened since the fourth quarter of 2020 and eight more are in the works, according to C&W data. In the United States, 313 food halls are open and another 145 are in development, more than double the number open in 2017, Colicchio said. The great promise of the American food hall is back and, much like New York City, bigger, if not better, than ever.

“I think a lot of people thought that the food hall was the new golden pill, but it’s a business like every other business,” Eldon Scott, who founded Urbanspace’s U.S. operations in 1993, told CO. “You need a great location and great operations. The mistake people might be making is thinking, ‘My food hall didn’t work, so food halls don’t work.’ But, no, it’s your business. Do you have a good business model? Do you have a good location? The basic product is very much in demand from consumers right now.”