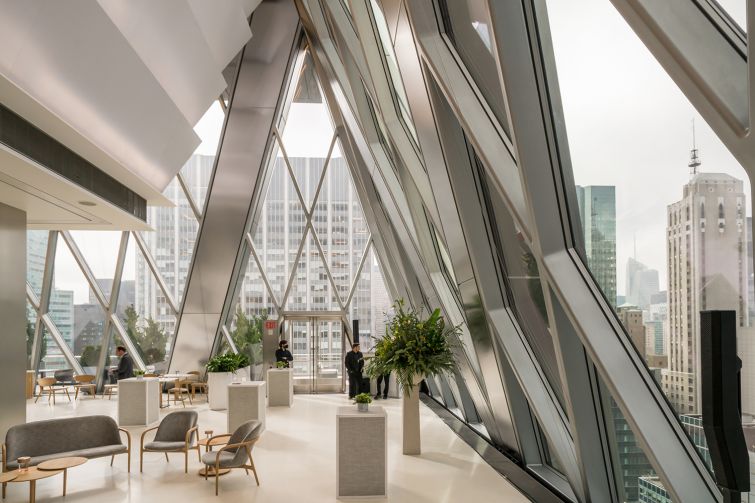 Sacred, hallowed, heroic, iconic. These were among the adjectives used to describe Park Avenue by those behind the construction of its newest skyscraper at an Oct. 26 event marking its opening.

David Levinson and Robert Lapidus, the partners behind L&L Holding Company, talked about the travails of building 425 Park Avenue, a spot they saw as “sacred.” It was worth the effort of not only acquiring the land lease, they said, but also the 10-year quest of getting the existing tenants out of the old 425 Park in order to build the new one.

The last three adjectives — hallowed, heroic and iconic — came from Norman Foster, the British architect on the project who made regular pilgrimages to Park Avenue when he was a student at Yale in the early 1960s.

“There’s only one Park Avenue. … [It] is the very essence of the New York grid. The facades line up generally so it creates this pedestrian-
scale, almost heroic thoroughfare. And then, with the setbacks, the towers rise out of it,” Foster said during a panel discussion at the event. “It’s kind of a hallowed place and really unique. So how do you respond to that and create a building with its own powerful identity?”

The 47-story tower with 680,000 square feet of office space has a tapered profile that is divided into three sections that get progressively narrower. The asking rents, which start at around $200 per square foot, get more expensive as you rise closer to the top. Each section is bookended by triple-height, atrium-
style amenity centers, with the uppermost serving as The Diagrid Club.

The building can be identified in the New York City skyline by its illuminated ornamental fins attached to the 38-foot-tall penthouse floor.

Tokyu Land Corporation’s Masashi Okada and BentallGreenOak’s Jonathan Epstein spoke on behalf of their firms, which were also partners in the project, about how COVID-19 accelerated demand for creative office spaces with more light and better air quality. Being ahead of the curve seemed to have worked for the partnership in the long run as design angles thought of a decade ago have brought the building to 85 percent leased in a very tough office leasing market — and it just opened.

“Coming out of the Great Recession, we saw this big employment surge in the tech industry,” Epstein said. “The war for talent was defined a lot of times by what types of office space people had, what amenities people had. Anybody can do a LEED-certified building. We’re going to go to the next step and go to these emerging wellness standards, because, rather than the building materials, we’re going to focus on the human beings inside of them.”

Epstein was drawn into the partnership in part by Levinson’s vision of bucking the trend of average Park Avenue buildings having a light penetration rate of only 23 to 24 percent, according to the developers. Instead, 425 Park’s team wanted to create a building with up to 90 percent.

On Oct. 26, the executives were at the entrance of the main lobby, which has 45-foot ceilings, cutting the ribbon on 425 Park. Okada cut his finger with the golden scissors in the process. Interpret that possible omen as you will.