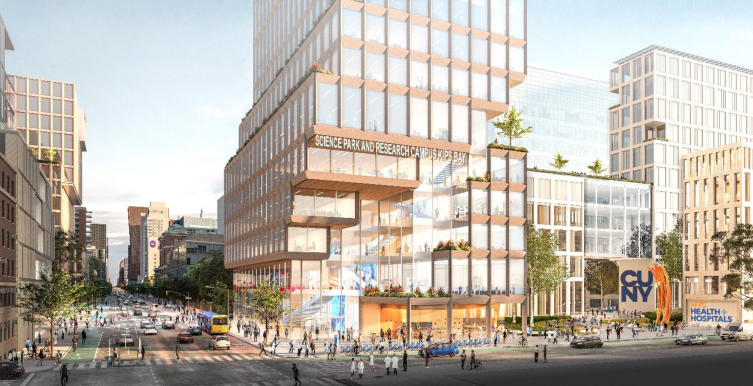 Manhattan’s Kips Bay is getting a boost as Gov. Kathy Hochul and Mayor Eric Adams on Thursday announced fresh funding for a life sciences facility.

A 5-acre site along First Avenue and 25th Street, to be known as Science Park and Research Campus Kips Bay, or SPARC Kips Bay, will house academic institutions such as the City University of New York‘s nursing school and the New York City Department of Education. It will also have a forensic pathology center run by the city’s medical examiner and an ambulatory care center for NYC Health + Hospitals.

Architecture, engineering, urban planning firm Skidmore, Owings & Merrill will provide support to the New York City Economic Development Corporation and CUNY in the project, but a specific developer was not named. The project could create 10,000 jobs during the construction period, and 2,000 permanent jobs once construction is complete.

Hochul and Adams expect the 1.5 million-square-foot expansion will create up to $25 billion in economic benefits over the next 30 years after the investment of $1.6 billion from the city and state. The project is expected to break ground within the next two years, but officials were reluctant to provide a hard timeline.

The city and state also plan to build a pedestrian bridge over the FDR to the facility, according to Politico New York, which first reported the news.

“This can be transformative. It can give people the chance to get a good job, a good education and the opportunity to have different health care outcomes,” Hochul said during the announcement. “We have a need, we have the demand, we have the young people in communities, particularly those that have been hardest hit [by the pandemic]. If we can make that connection to get them into the doors to get the training, there’s no stopping us.”

Hochul said the project will also help ensure that New York is prepared for any future health crises, considering the strain that COVID-19 put on health facilities in 2020.

“This site was planned to be a sanitation location. We took trash and turned it into treasure,” Adams said. “We’re going to have everything from labs, office spaces, classrooms, business incubators — all the pieces we need, as well as open space for the neighborhood. This is going to revitalize the entire area.”

But not only is life sciences space good for public health, a new Cushman & Wakefield report shows that it’s also good for commercial landlords, especially with demand for office space so uncertain. Demand for life sciences space remains steady, with the sector seeing an annual growth rate of 6.6 percent for jobs in labs.