The real estate industry servicing the sector is benefiting — for now 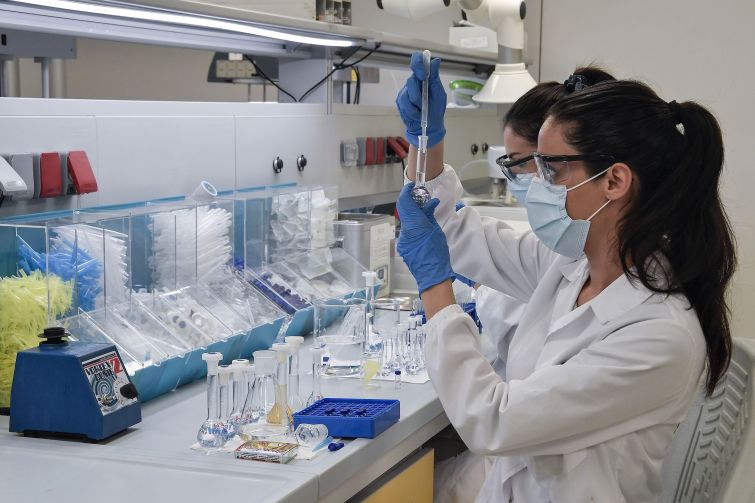 Through August this year, there were a total of 413,120 life sciences job postings, which is 28 percent higher than the same period last year. Photo by LOUISA GOULIAMAKI/AFP via Getty Images

It’s a good time to own lab space.

While workers appear to be wandering away from traditional offices, laboratories and research & development real estate are full as the number of life sciences jobs continues to reach new heights. A new report from Cushman & Wakefield shows how life sciences employment in the U.S. has grown at an accelerated pace and more than doubled over the past 10 years.

The rate of hiring for scientists and lab users has outpaced overall employment in that time with an annual growth rate of 6.6 percent, according to the life sciences market update. The total annual job growth rate is just 1.2 percent, by comparison.

This shows the sector is well positioned to weather the uncertainty brought on by periods of economic slowdown, per Cushman & Wakefield. Indeed, life sciences employment did not falter during the pandemic, with year-over-year job growth increases of 11.4 percent in 2021 and 14.5 percent in 2022 as of June.

Postings for life sciences jobs are also at double pre-pandemic levels. Through August this year, there were a total of 413,120 life sciences job postings, which is 28 percent higher than the same period last year.

“Growth in demand for life sciences employees has mirrored lab space inventory growth as employers race to meet the needs of this growing sector,” C&W’s Sandy Romero said. “Current projects under construction in the U.S. are expected to add an additional 26.6 million square feet of lab space to existing inventory. These brand-new, state-of-the-art facilities across major markets will provide a home for future talent and next-generation life science innovations.”

The San Francisco Bay Area and Boston have two of the largest employment bases — and the largest inventories of lab space. Boston has the largest construction pipeline with 13.9 million square feet of space under construction, which comprises 43 percent of Boston’s current lab space inventory. For projects due to be completed in 2022, 60 percent of the space is preleased.

While lab development in New York City is still in the early stages by comparison, it also has one of the largest life sciences employment bases in the country due to its large research institutions, which include Weill Cornell Medicine, NYU Langone and Memorial Sloan Kettering, according to Cushman & Wakefield. More space will be added with Deerfield’s 325,000-square-foot redevelopment of 345 Park Avenue South, and Taconic Partners’ 399,000-square-foot redevelopment of 125 West End Avenue.

National life sciences leasing activity totaled 7.2 million square feet for the first half of 2022. The top three most active markets in the first half were San Diego, Boston and the Bay Area. U.S. asking rents are 67 percent higher this year than in 2015, and inventory has grown in tandem by 29 percent across the markets tracked by Cushman & Wakefield.

Even though its trajectory appears strong, the life sciences sector is not immune to overarching economic factors like inflation, higher interest rates and tightening capital markets. Although asking rents have continued to grow in several markets from year-end — including double digit growth in Seattle with 27.2 percent growth, and San Diego with 31.3 percent — a few markets experienced some softening, including Boston and the Bay Area seeing rents drop 4.5 percent and 3.3 percent, respectively.