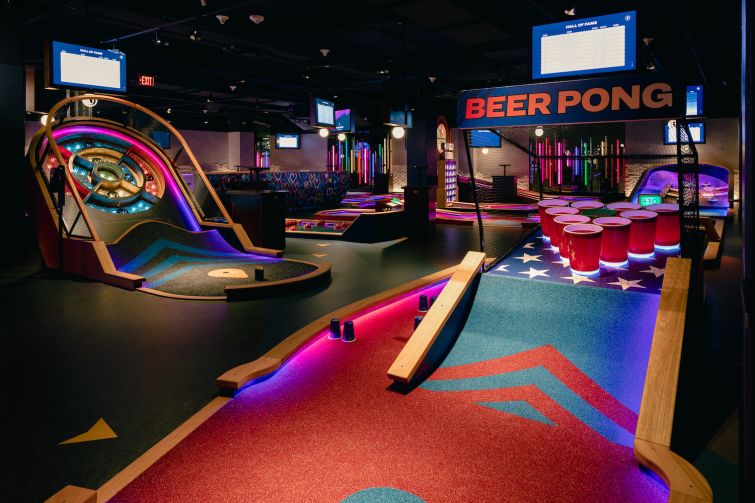 Puttshack, a tech-infused miniature golf course that serves food and booze, is coming to Reston, Va.

The popular mini-golf company has inked a 29,000-square-foot space at 1850 Reston Row Plaza with owner Comstock. The facility will be part of the Phase 2 development underway at Comstock’s 80-acre Reston Station development.

“Comstock was looking for a new-to-market concept to enhance our market-leading merchandising strategy at Reston Station,” Tim Steffan, the COO at Comstock, told Commercial Observer. “Puttshack has the tech-forward brand innovation we were targeting to grow our stable of experiential retail and entertainment at the project. Their modern approach to indoor games and entertainment is the perfect complement to our demographic mix of office and residential tenants at Reston Station.”

Puttshack is the latest miniature golf course for  adults in the Washington, D.C., area. Others include Swingers at 1330 19th Street NW in DuPont Circle; CitySwing DC at 901 New York Avenue NW; and Perch Putt at 1805 Capital One Drive in Tysons, Va.

Puttshack Reston will feature four nine-hole courses powered by the brand’s patented Trackaball technology, which tracks scores as people play. Additionally, a new game component currently in the final stages of development will be featured in the space, according to the company (though Puttshack was mum on the details).

Additionally, the venue will serve food and signature handcrafted cocktails. Players under 18 will not be permitted after 9 p.m.

“With Reston Station’s lineup of emerging and established tech companies on site, the transit-oriented neighborhood was an immediate draw for our tech-driven mini golf concept,” Dave Diamond, Puttshack’s president, said in a statement.

Puttshack also has locations in Atlanta and Chicago, with new locations planned for Boston, Dallas, Denver, Miami and more over the next two years.

Puttshack Reston is scheduled to open in the summer of 2025.

Emerging Concepts was the tenant broker, and there was no broker on the landlord side.