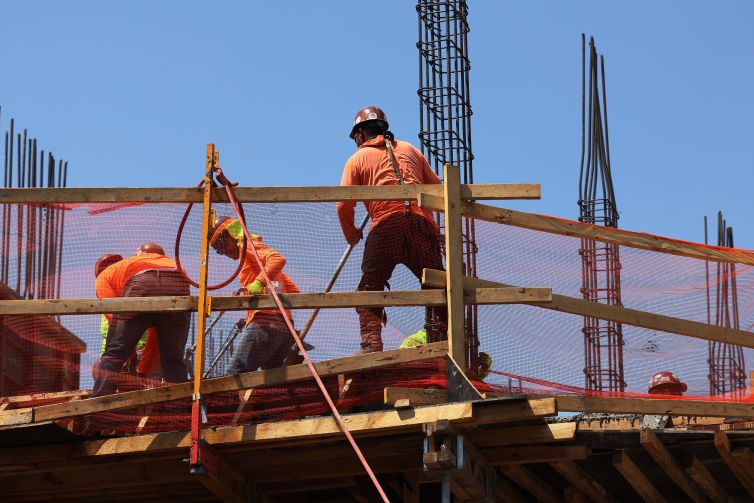 Construction workers work on a construction site on Lennox Avenue on July 22, 2022 in the Flatbush neighborhood of the Brooklyn borough in New York City. Photo: Michael M. Santiago/Getty Images

Construction spending in New York City could reach as high as $86 billion in 2022, up from $38 billion in 2021, but there still isn’t enough housing in the mix.

That’s what the New York Building Congress illustrated in its 2022-2024 New York City Construction Outlook released Wednesday, predicting construction spending could reach a total of $270 billion over the next three years.

The spending will include 30,000 units of housing set to come online by 2025 — on top of the 71.5 million square feet of residential units being built this year alone — but the supply is not outpacing demand, according to the Building Congress.

The trade group projected the city will still need more than 560,000 new units by 2030, which it argues won’t be possible without a replacement for the 421a tax abatement that expired June 15.

“We need to find a suitable replacement for the expired 421a program, streamline the land use review process, and increase as-of-right zoning capacity,” Carlo Scissura, CEO of the Building Congress, said in a statement. “Not only does the city’s economic recovery depend on it, our current housing crisis demands it.

“The city’s population has increased by more than 625,000 in the previous decade, while we have added only 206,000 units,” Scissura added. “That is not only unsustainable, it’s alarming — and justifies a swift and decisive response.”

The 421a tax abatement was estimated to be used by 56 percent of all multifamily residential units built in the last eight years, and developers warned its demise would make it harder to build new housing. But the tax provision was criticized by some as enabling the construction of luxury rentals with so-called “affordable” units often still priced way above what an average family could afford.

And it has led to some allegations of fraud. The Manhattan district attorney indicted six Brooklyn developers this week for violating 421a by overcharging Bushwick tenants.

The possible slowdown in construction for housing in New York comes as multifamily is well on its way to being one of the top asset classes for investors in real estate across the country. The dollar volume of multifamily transactions in New York City minus Staten Island was up 37 percent annually in the third quarter, according to investment sales firm Ariel Property Advisors, and the average dollar volume was also 71 percent above the five-year quarterly average of $2.085 billion.

On a national scale, rising interest rates and inflation are killing the dream of owning a home for many, but that has proven advantageous for developers looking to build apartments.

Permits to build multifamily housing nationwide jumped 28 percent in August compared to July, while permits for single-family dwellings were up just 3.5 percent, according to a report released in September by the U.S. Census Bureau and the U.S. Department of Housing and Urban Development.

Instead of housing, retail or hotels, the bulk of new developments coming to New York City will cater to offices and health care facilities, according to the Building Congress. Six million square feet of office space will come online by the end of 2022, including Related Companies’ 2.9 million-square-foot 50 Hudson Yards, Brookfield’s 1.9 million-square-foot 2 Manhattan West  and Oxford Properties’ 1.3 million-square-foot 550 Washington Street.

Five new skyscrapers will bring 10 million square feet of office space to the city in 2023 and 2024, with Tishman Speyer’s 66 Hudson Boulevard being the biggest addition at 2.85 million square feet, according to the Building Congress.