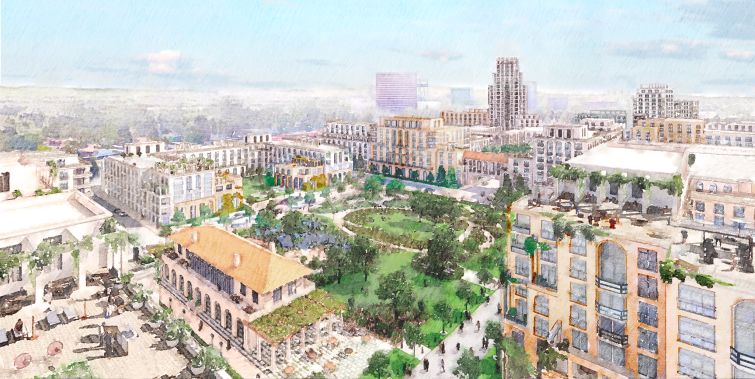 A sprawling big-box retail complex in Southern California will be replaced with close to 4,000 units of housing, the Related Companies announced.

The 41 acres in Santa Ana, Calif., known as Metro Town Square will be redeveloped as Related Bristol, according to the developers. The massive project means not only a massive injection of 3,750 apartments into the housing stock in Orange County, but also 350,000 square feet of commercial space, 200 additional units of senior housing, a 250-room hotel and 13 acres set aside for open space.

Related did not disclose the projected cost of the development.

The redevelopment can kick off after 2025 when leases for the existing tenants all expire and a new 99-year ground lease can be signed between Related and the families that own the land. One of the families holding the properties are the Callens, who have owned the land since it was a beet farm in the early 20th century, according to Related.

Currently, the parcels of land tout a Vons grocery store, a Ross Dress for Less and a Bed Bath & Beyond near Bristol Street and MacArthur Boulevard.

The first phase of the project would see the start of the hotel, the 200 units of senior housing, and a 47,000-square-foot grocery store to replace the Vons.

“Related is excited and eager to create a new model for a dynamic mixed-use urban village, a destination where the possibility for community, culture and connection will be around every corner whether you live here or are visiting to shop, dine or simply enjoy a walk with a friend in the parks or along the landscaped paseos,” Steven Oh, Related’s senior vice president, said in a statement.

Related submitted the entitlement application for Bristol to the City of SantaAna in late August. Public review will be followed by an environmental analysis of the project, which could last through the spring of 2023, with the planning commission and city council likely to hold hearings that summer.

If all the parties involved meet that timeline, Related expects the entire development to be completed by 2036. When construction for the 3,750 apartments would take place was not immediately made clear.