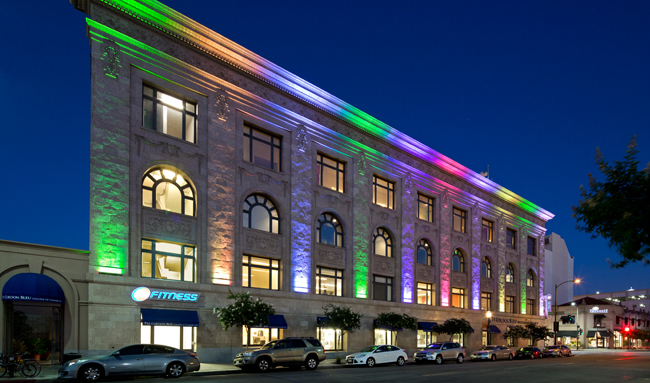 The four-story Star-News building was built in 1925 and renovated in 2000. It includes 82,500 square feet of office, retail and restaurant space at 525 East Colorado Boulevard. photo: Greenbridge Investment

The casual eatery specializes in one of Los Angeles’ staple meals: the breakfast burrito. The building was previously a training location for aspiring chefs at Le Cordon Bleu College of Culinary Arts, and Wake & Late will use its new space as a storefront for food and coffee sales, as well as for a large-scale bakery that will supply bread, pastries and baked goods for all of its stores.

The 82,509-square-foot building is at 525 East Colorado Boulevard in Pasadena’s financial district, near the historic Pasadena Playhouse, Pasadena Civic Center and Paseo Colorado. The second, third and penthouse floors of the 97-year-old structure are currently vacant.

“To support a culinary institute, the building showcased its incredible capacity to handle the simultaneous operation of multiple professional-grade kitchens where aspiring chefs perfected their crafts day after day,” Greenbridge’s Sean Hashem said. “Greenbridge maintained the property as a culinary fortress that far exceeds the needs of our tenants.”