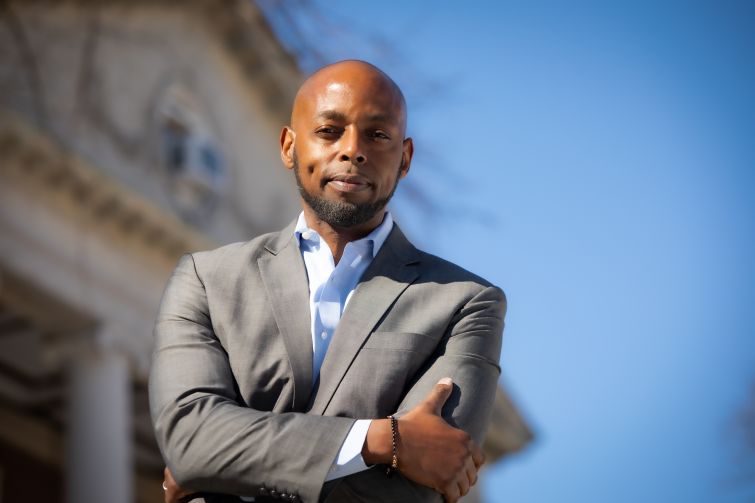 It’s an interesting time for affordable housing in New York City. While the asset class is more needed than ever and considered recession-proof, the expiration of the 421a tax exemption in June makes its future viability bleak.

Edward “Ed” Poteat grew up in Mitchell-Lama housing and from an early age was keenly aware of the importance and preservation of affordable housing. He got his career start in Chase Manhattan Bank’s real estate investment wing and launched his own firm, Carthage Advisors, in 2011, dedicating the past decade to building affordable housing and improving communities around his developments.

Commercial Observer caught up with Poteat to learn more about Carthage’s latest project, and what’s on his mind as we head into a volatile fourth quarter.

Commercial Observer: How did you first become interested in affordable housing development?

Edward Poteat: I’d say I accidentally got into commercial real estate. I was born and raised in Harlem in the ’80s, when things were much worse than they are right now.  I went to Yale in the early ’90s [where he studied economics], came back home, and asked myself, “How do I give back to my community in a way that’s meaningful, without being a social worker or teacher?”

One huge problem was housing because, way back when, so many neighborhoods throughout New York City were derelict, and no one knew how to bring back those neighborhoods. So, I dove right into that field, and multifamily real estate specifically.

Did you have any family in the field?

No. My mom was a maid, and my dad was a factory worker, so I had no family background in commercial real estate.

What was their first reaction when you told them you were going to pursue a career in commercial real estate?

They thought I was a complete idiot [laughs]. I had just graduated Yale and they said, “Why are you trying to do this? This isn’t going to work!” But I knew that I was extremely lucky, coming from the background that I came from, going to a school like Yale and having decent opportunities in front of me. I could have worked on Wall Street and been a banker, but I felt I should probably do something more meaningful, given where I came from, and not just be a banker in New York City.

Tell us about your path to launching Carthage Advisors.

Carthage was started in 2011, and I was in an affordable housing partnership for 10 prior to that [HP Development, LLC],  which I left during the recession because I wanted to go out on my own. It was a really  interesting time in the market when we launched Carthage and we ended up buying multifamily properties and renovating them. The good thing about affordable housing is that it’s recession-proof, so it’s helped me get through several cycles, because we’ve never been caught out by the market.

When we started Carthage, we already had a presence in Harlem, and in New York City more generally, and then we opened an office in New Jersey as well, buying up multifamily properties and renting them out.

How many projects do you have in your portfolio today?

We have around 1,500 units, and our largest project right now is Marcus Garvey Village, which is right in the heart of Central Harlem [at 224 West 124th Street], but we’ve done all types of multifamily projects — including ground-up — and we’ve done for-sale housing, too. Our focus has always been a triple bottom line: doing well for ourselves, doing well for our  communities, and doing well for our investors.

Your Marcus Garvey Village project will comprise two 18-story rental buildings, and 330 apartments — half of which are devoted to low-income families. Tell us more about it.

The site was once a failed project by a famous church in Harlem called the Abyssinian Baptist Church. They got in trouble during the recession, and had to sell the site. So we bought it from them back in 2018 for about $30 million. At the time, we knew that we wanted it to be more than just a market-rate development.

This project is really cool, and I know that I’m biased saying that, but we’re fighting gentrification through development because so many neighborhoods are being gentrified. And I think we’re showing people that you don’t need to kill development to stop gentrification. If you stop development, in some ways, you’re actually adding to gentrification because existing units become more highly valued.  We’re opening up Harlem to more families in a way that’s not gentrifying our community, and we’re  doing it by creating affordable housing and also important community spaces.

I read that the property includes a cultural center for the LGBTQ community.

That’s right, and also a performance space for local artists. The Apollo Theater is one block from us, but you’ve got to be fairly famous to get on that stage [laughs]. We’re providing performance spaces for smaller artists, who will be able to perform on a beautiful rooftop 20 stories up, right next to the power of the Apollo.

Honestly, the project has a lot of cool elements. The block that we renovated was probably one of the worst blocks left [in the neighborhood]. So we’re not only providing affordable housing, but improving the neighborhood because we were the weak block where drug dealers once hung out, and abandoned cars once sat. So, we were able to take over this whole block that will now improve the other blocks around us.

How difficult was it to turn the block around?

It was interesting. I mean, we had many fights with our neighbors along the way [laughs] because there were condo developers around us who said “Why are you building affordable housing? We don’t want it. Just build condos right and help with our [property] values.” We said: “Guys, we’re going to cut the baby in the middle. It’s 50/50 [market rate and affordable] and there will be something for everybody.”

Do you use a mixture of debt and equity for your acquisitions? And, if so, how is your access to the capital markets as a Black developer in New York City?

It’s beyond tough. Some people cry racism, but in my opinion it’s not racism, it’s actually something a lot more innocent — which is that people like working with people that seem like them. And, so, to me, it’s not hatred-style racism, it’s just “I’m comfortable with someone that looks like me, and comes from my background.”  I’m a dark-skinned black guy that comes from Harlem and grew up there in the ’80s. I don’t share a commonality with a lot of people in the capital markets [laughs].

How do you get around that?

Has your experience improved over the past 10 years?

A little bit. There was a bump in interest after the George Floyd incident for sure. But it doesn’t discount having a strong project. That never goes away. We’ve been relatively fortunate, as we have investors that believe in us and lenders that we now have a long track record with, and who know we deliver.

We built a project in 2011 called 88 Morningside, which at the time, was one of the first market-rate for-sale projects in Harlem, and we got through the recession with the project selling out because we had a strong product. So people say, “This firm has been able to deliver even through the worst of the markets, so it can execute in a normal market.”

You’ll be busy for the rest of this year with your most recent project, but how do you see your portfolio expanding over the longer term?

We still believe in affordable housing. I grew up in Mitchell-Lama housing, so I saw the benefit firsthand, coming from a low-income family. It’s nice not to have to worry about housing, because you have to worry about everything else. So I’m a big advocate, and we have another deal that we’re working on in the Mott Haven section of the Bronx. God willing, we’ll do a deal every year.

There’s a lot of concern in New York City with the expiration of 421a. How do you think the city is positioned going forward from an affordability standpoint?

I don’t think people realize how bad the elimination of 421a is. Some think, “Well, we’re going to stop rich developers getting richer,” and I get that, but [with 421a]  30 percent of the housing developed has to be truly affordable, which is why you have affordable housing in Times Square in Midtown and the Financial District. That’s now been eliminated and there’s no financial reason to build affordable housing, except in the poorest neighborhoods in New York City where land values are low.

Secondly, it’s going to be very hard to build rental housing, period. So with  less supply and more demand, rents are going to go up, and four or five years from now, people will say, “Why are rents still so high? I thought we had these programs in place?” But you’re not adding any more supply, except through [Housing Preservation & Development]. They mean well, but they just can’t do it all. The 421a program could have been tweaked to have deeper skews of affordability in there,  but not to have it at all? It’s a disaster we’ll see in 2028.

I read an article recently saying that Maspeth, Queens, is taking off, because it’s one of the last affordable neighborhoods left in New York City. So people are finding it in the middle of Queens. There’s little transportation, but they’re moving out there because you can still rent at a decent number — for now.

What’s your favorite part of the job today?

It’s really the tenants. Some I worked with 10, 15 years ago, and they walk up to me and say, “You know what? Thank you.” Sometimes it’s a young family with three kids who say, “I’m in a decent three-bedroom place, and I wouldn’t be here but for this building.” That still gets me out of bed every day.

I’ve been doing it for 10 years, teaching  young adults going into private equity and commercial real estate. What I tell them is “My job is to convince you to stay in this industry, because we need you,” but then what I also tell them is, “You know, some of the biggest people in the industry have cut their teeth on affordable housing. Have you heard of a guy named Stephen Ross?” And then they kind of perk up and say, “OK, maybe I can do well and also do right at the same time in this industry.”

They’re proud of me now, at least I hope they are [laughs].