REITs and private equity are seizing the moment to jump into the space, though 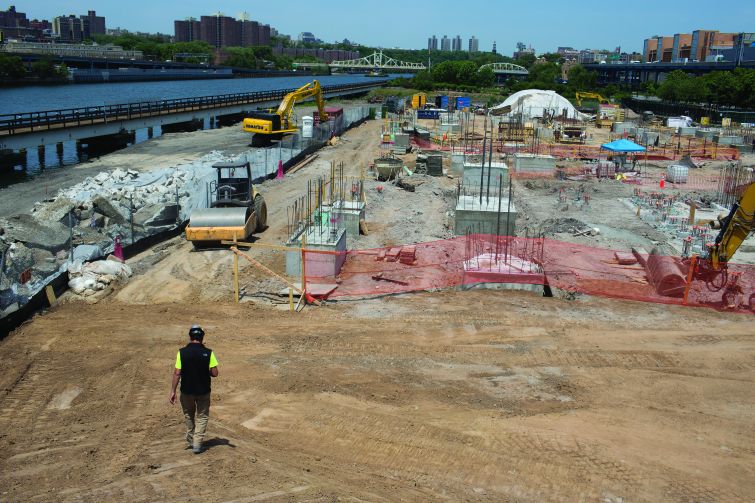 POINT COUNTERPOINT: Affordable housing is still being built, like Bronx Point, which will include 542 below-market-rate apartments. Photo: Andrew Lichtenstein/Corbis via Getty Images

Affordable housing is a scarce resource in New York City, but uncertainty on Wall Street and in Albany has investors entering the market with trepidation.

Sales for multifamily buildings in the city with subsidized and regulated units have tumbled despite historic housing demand. There were $3.4 billion in sales for these buildings during the first six months of the year in Manhattan, Queens, Brooklyn and the Bronx, an amount that fell by 24 percent compared to the $4.5 billion that sold in the second half of 2021, according to research compiled by investment sales brokerage Ariel Property Advisors.

That sales volume is still far ahead of the first half of 2021 when just under $1 billion worth of affordable properties traded hands as the city emerged from the depths of the pandemic.

But the slowdown could continue through the year thanks to inflation, rising interest and mortgage rates, and the absence of property tax abatements that can spur development, analysts say.

“We don’t think it’s going to be drastically lower but somewhat lower,” Shimon Shkury, president and founder of Ariel Property Advisors, said. “The transactions we’re seeing right now are from people making strategic decisions to sell or buy, and both sides are willing to meet the market.”

Market-rate multifamily properties fared a little better over the same period. There were $4.9 billion in multifamily transactions in the first six months of the year, up 12 percent from $4.3 billion in sales during the second half of 2021, according to Ariel Properties.

But developers have a long way to go to meet New York’s housing needs. There’s an immediate shortfall of 227,000 units that the city’s current workforce needs to stay here, and developers must provide another 333,000 units by the end of the decade as the city continues to grow, according to a 2022 Real Estate Board of New York study.

The housing scarcity is driving up prices elsewhere. Median rents in Manhattan reached $4,000 for the first time this spring, which meant that New Yorkers needed to earn at least $160,000 to rent an average apartment in the city. Brokers began taking advantage of tenants’ desperation by bringing back fees for apartment applications last fall, and some tenants even engaged in bidding wars for studio apartments.

The city’s housing crisis spurred Mayor Eric Adams to plunk an additional $5 billion into capital funding for new housing construction, bringing the city’s total investment to $22 billion. But his 94-page housing plan did not include any goals for a specific number of units to be built, leaving critics to question whether the city would ever accomplish its goals.

Even when affordable housing projects make their way through the development process, they can face daunting challenges. A supportive housing complex at Jacobi Hospital in the Bronx has been met with protests and opposition from local elected officials. And a 123-unit rental building for seniors that would be built atop a private garden on Elizabeth Street in SoHo has been stymied by lawsuits from community members and court delays for a decade.

Still, investors have plenty of opportunities to meet the city’s ravenous housing needs, which will only grow over time.

“Affordable housing is in really high demand. A lot of investors are interested in it who didn’t used to be,” David Schwartz, co-founder and principal at Slate Property Group, said. “There’s nobody who thinks the U.S. has too much affordable housing.”

After sales sputtered during the pandemic, a new crop of investors has been drawn to the affordable housing market beyond the usual group of long-term institutional players.

Private equity groups and real estate investment trusts have been scouring New York as well as Texas, Florida and the Carolinas for affordable multifamily properties.

Blackstone, which owns 5,000 rent-restricted units at Manhattan’s StuyTown, acquired 80,000 units nationwide from insurer AIG for $5.1 billion in December 2021. A few months later, the investment banking behemoth formed a new company, April Housing, to manage its portfolio of 90,000 government-regulated units with intentions to spend $500 million to maintain its apartments over the next decade. Its portfolio includes three developments with 190 below-market-rate units that the Bushwick, Brooklyn-based nonprofit RiseBoro won a majority stake in after a lengthy court battle.

“They have a mindset that real estate in New York will never go bad. They are so deep-pocketed they believe there will be changes to the rent laws in the future,” said Joseph Strasburg, president of the Rent Stabilization Association, which represents small property owners. “They are in it for the long game.”

Sellers have been unloading their properties for different reasons. The price of real estate has soared thanks to skyrocketing demand and high land values, making it an auspicious time to cash out.

“People sell in New York City usually for strategic reasons,” Shkury said. “They made a decision to reinvest in other assets bought a long time ago, sometimes a fund came to its end and liquidates, and sometimes there’s a partnership breakup or someone died.”

But smaller property owners have additional stresses that have gone into their decisions to sell. Those who couldn’t collect money from tenants unable to pay their rent during the pandemic or get subsidies from the state were left with shortfalls at a time when costs to operate buildings have increased.

“We asked ‘Why are you doing it’ and their attitude is ‘Things aren’t going to get better, we have some equity in our buildings, we have to sell at a discount and get out with some money in our pockets,’ ” Strasburg said. “They’re in trouble, they’re afraid of losing their building. They’re scared. The pandemic really hurt them badly.”

The city’s most prominent affordable housing developers have remained well-positioned to build subsidized units throughout the pandemic, and hundreds of projects are in the pipeline. Last year, L+M Development Partners and Type A Projects broke ground on Bronx Point, a $349 million complex consisting of 542 below-market-rate units and a Hip Hop Museum.

Douglaston Development is working with the New York Botanical Garden to develop two properties that would include 450 units for low-income seniors and families while also redeveloping the Kingsboro Psychiatric Center campus in East Flatbush, Brooklyn, into 900 affordable homes.

Aaron Koffman, who manages Hudson Companies’ affordable housing portfolio, has looked at condominium properties, but rentals remain his firm’s focus at the moment. Hudson currently has 3,000 active affordable units with another 3,000 in the pre-development phase across the city while also developing three homeless shelters.

“We’re adapting to the times, with more [New York City Housing Authority] partnerships, more shelter development, and we’re actively looking for opportunities with senior housing,” Koffman said. “We still have a housing crisis, and it’s our job to increase the supply. We’re still very much betting long on New York City and finding more housing opportunities wherever we can.”

But Koffman has found prices confusing to evaluate thanks to jittery sellers and uncertainty surrounding interest rates and inflation.

“All the sellers are holding out for what prices were six months ago, so it’s a tough time. I’m worried about them going up even more,” he said. “We’re not seeing tons of discounts. I don’t really know why. I would say land is slightly overvalued right now.”

Subsidized multifamily properties have traditionally been seen as stable investments, but new challenges have emerged over the past three years.

New York state’s passage of stronger rent regulations in 2019 helped tenants by preventing landlords of rent-stabilized properties from deregulating units and significantly raising the price of leases after tenants move out. But the new rules also capped rent hikes for making repairs to units, which real estate groups have said lead to fewer renovations because there’s less incentive to maintain buildings.

That could mean investors would have to budget more money for rehabilitation and maintenance if they acquired a prewar building.

“The price expectations have changed,” Shkury said. “When the law passed, that business plan changed completely. Today you can’t upgrade the building, you have to assume your rents stay where they are.”

This year, state lawmakers killed the property tax incentive known as 421a that enabled developers to build market-rate rental properties as long as they reserved one-fifth of their units for tenants earning 130 percent of the city’s area median income (AMI), currently $156,130 for a family of three.

Investors jumped to acquire sites with tax abatements, and developers rushed to break ground on their projects to take advantage of the tax incentive before it expired in June. There were $1.8 billion in sales of 421a buildings in the first six months of the year, up 126 percent from the $774 million in 421a sales during the second half of 2021, according to Ariel Property.

But construction is expected to dwindle quickly in the coming months as owners face higher taxes, land costs and building costs for these units. That could increase demand for these properties in the short term, boosting prices for buyers.

“Without a tax abatement you’re not going to be able to build a residential rental, which will result in less supply,” Shkury said. “The best way to create affordable housing is to produce a lot of units quickly.”

The real estate industry’s pleas for tax breaks have not been welcome in Albany, where state lawmakers nixed Gov. Kathy Hochul’s proposed revision of 421a in the state budget this spring and let the incentive expire on its own before the end of the legislative session. After several progressive lawmakers won Democratic primaries this summer, the outlook for reviving the tax abatement became even bleaker.

“We have to make the tent bigger and expand the pool of eligible households up to 100 percent AMI,” Koffman said.

But property tax breaks are not at the forefront of the agenda of housing advocates, who instead want legislators to pass laws that cap exorbitant rent hikes and halt evictions. Advocates have little sympathy for affordable housing developers who depended on 421a abatements and landlords who justify rent increases by saying their costs have jumped.

“It really is about them making money,” said Cea Weaver, campaign coordinator at Housing Justice for All. “In any other asset class, you are expected to put some amount of capital appreciation your business enjoys back into the business. What’s going on in the property market is very good for them, and honestly it’s a ridiculous narrative otherwise.”

CORRECTION: This article was updated to reflect the correct amount of housing with subsidized and regulated units sold in Manhattan, Queens, Brooklyn and the Bronx in the second half of 2021.