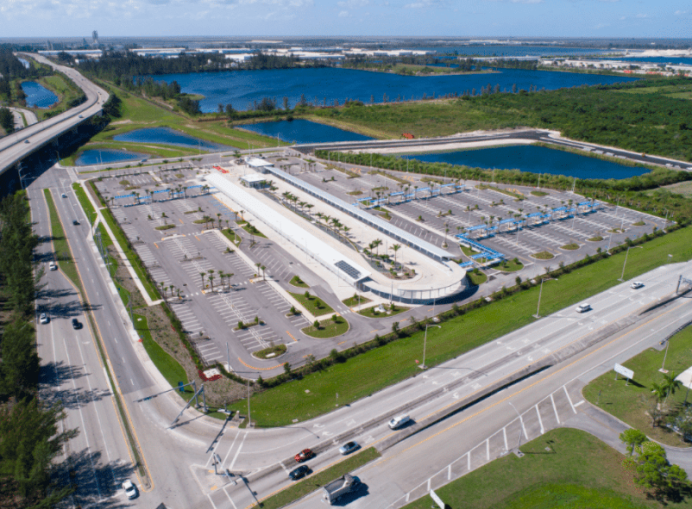 Terra is planning a massive, mixed-use complex — a small city essentially — connected to the Dolphin Station.

Called Upland Park, the 43-acre development will hold more than 1,700 homes, an office component, 200,000 square feet of retail, a hotel, a school and a life sciences facility, according to public records and Terra CEO David Martin.

Miami-Dade County commissioners approved a 97-year ground lease of the land to Terra, for a total of $1.17 billion.

The residential portion of the project, which will include both mid-rise and garden-style apartments, will target low-income earners. Some units will be marketed to military personnel stationed at the nearby U.S. Southern Command in Doral, Miami Today reported. Those earning 80 to 140 percent of the area median income are expected to fill most of the remaining apartments.

Located on the outskirts of Miami-Dade County, the vacant site sits near the Dolphin Station between the Dolphin Expressway and Florida Turnpike highways. The busy intersection boasts an IKEA and the Dolphin Mall.

“The development will generate thousands of jobs and will also create new rent and tax revenue for Miami-Dade County on land that is producing zero profits currently,” said Terra’s Martin in a statement.

Miami-Dade Commissioners approved the plans last week, according to the records. In addition to the $1.2 billion in rent, the county expects to earn another $3 billion in estimated property taxes over the 97-year period, per the records. Terra will cover the $20.1 million cost of maintaining the station.

A spokesperson for Terra declined to divulge when the construction would begin or whether the developer had secured financing.

Coconut Grove-based Terra is one of the most prolific developers in South Florida. According to the company, its portfolio holds 10 million square feet of residential, commercial and mixed-use developments valued at more than $8 billion.