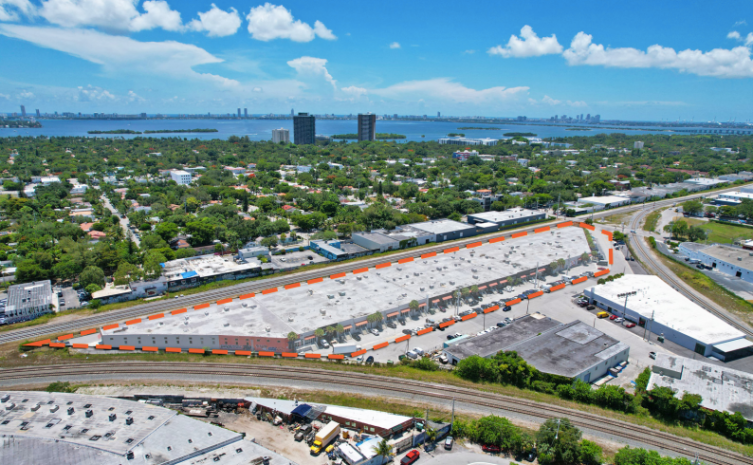 After a contracted sale fell through two years ago in the wake of COVID, a mixed-use building in Miami’s emerging Little River neighborhood is back on the market, asking for an additional $6 million.

Called Rail 71, the 127,562-square-foot building offering flex spaces is for sale for $39 million. It’s home to the corporate offices of Pubbelly Sushi, a popular South Florida chain restaurant, as well as the art gallery Dot Fiftyone. The asking price equates to $305.73 a square foot.

The single-story property sits on 3.6 acres at 7205 NE Fourth Avenue, two blocks west of Biscayne Boulevard. The owners, a Pan Am Equities-led venture, was in contract to sell the property for $33 million two years ago, but the deal fell through because of the pandemic, per The Real Deal and property records. The property was relisted for $32 million, but didn’t sell.

Little River is a Miami neighborhood vying to become the next Wynwood, a warehouse-laden district that has transformed over the past decade into a shiny nightlife spot and tech hub with companies such as Blockchain.com opening offices.

Some of Rail 71’s tenants are Wynwood émigrés, companies that moved to Little River in part because of the neighborhood’s cheaper rent, the listing brokers, DWNTWN Realty Advisors’ Tony Arellano and Devlin Marinoff, told Commercial Observer.

Rail 71 is 95 percent leased with rates ranging between $18 to $24 a square foot, modified gross, according to the listing brokers, who say that’s well below Little River’s current market rate of $35 a square foot, gross. Rail 71’s cap rate stands at 5.8 percent.

“It’s very rare that you find a building with under-market rents at a good basis,” Arellano said. The buyer “could buy a six cap right now, but with an additional $10 a foot in market rents, [he or she] is gonna make a lot more money for sure.”

Little River in the coming years is set to receive a major face-lift from the developers who helped to put Chicago’s now trendy Fulton River District on the map. Late last year, Adventurous Journeys Capital Partners paid nearly $80 million for assets around the neighborhood, totaling about 24 acres.

The neighborhood is already coming into its own, boasting popular Miami restaurants, including Rosie’s and Tran An. Oolite Arts, an organization that provides studios to artists, is building a campus with plans to shutter its Lincoln Road location.