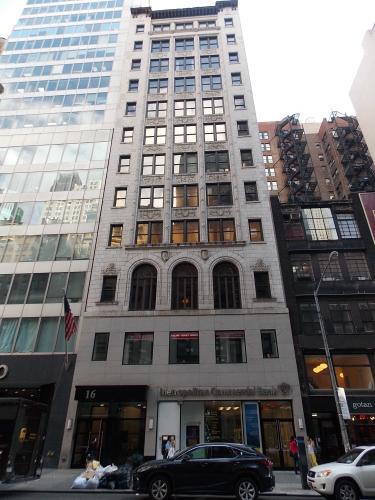 The purveyor of baubles with outposts across the world signed a 10-year lease for the office the Winter Properties’ Diamond District building. Milano has already started construction on the space and expects to move in by 2023, according to a source with knowledge of the deal. Asking rent was $52 per square foot.

Milano will be parting with its current offices at the Moinian Group’s 535 Fifth Avenue.

Raymond Balas, Wayne Siegel and Eric Siegel of LSL Advisors negotiated on behalf of the tenant while Anthony Sciacca and Rob Silver of Newmark represented the landlord. Neither firm immediately responded to a request for comment.

Milano Diamond Gallery was founded in 1990 as a retail-only business and later turned to manufacturing gemstones and jewelry. It has about 45 locations, mostly in the Caribbean, Alaska and Mexico.

Also known as the Schneider-Anderson Building, 16 West 46th Street is a 12-story neo-Classical office building designed by Hazzard, Erskine & Bladgen in 1912 that topped out in 1914, according to the New York Times.

The move for Milano comes as other jewelry companies seem to be reconfiguring their offices. In June, Xomox Jewelry signed a lease to move its workspace to 13,500 square feet at 240 West 40th Street, more than doubling what it had at 151 West 46th Street.

In March, the International Gemological Institute snagged 23,569 square feet of office space across the entire 12th and part of the 11th floor of 545 Fifth Avenue, CO reported at the time.

On the retail front, it was announced in March that Swiss luxury watchmaker Breitling plans to open a 3,807-square-foot Meatpacking District store after signing a lease for two floors at 875 Washington Street.