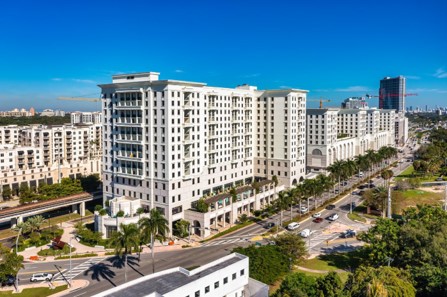 The acquisition, which was made through Hines Global Income Trust (HGIT), marks one of the largest multifamily purchases in South Florida this year, in line with Harbor Group International’s $400 million-plus acquisition of the 816-unit ParkLine Miami. The Coral Gables deal works out to roughly $869,000 per unit.

The development, at 215 South Dixie Highway, was completed in 2021 by Nolan Reynolds International. It is branded and managed by Life Time, a lifestyle management brand with an unfortunate WeWork-like branding philosophy — offering full-service LifeSpa and LifeCafe on premises, in addition to the Life Time Work and Life Time Living amenities listed earlier. While Hines’ management arm will manage the building, lifestyle aspects will still continue to be managed by Life Time.

The move is part of Hines’ interest on rentals, particular in the Southeast due to corporate and demographic migration. “It’s part of a big bet on South Florida,” Alfonso Munk, Hines’ CIO of the Americas and president of HGIT, told Commercial Observer. “Some of the migration will revert but we’re seeing a lot of permanence. We feel that this time around that corporate and demographic migration is part of a greater trend.”

Hines was particularly interested in the Coral Gables submarket, a primarily residential neighborhood not far from the heart of Miami, said Munk. Coral Gables has a high barrier of entry for development given both land constraints and local resistance to development, so Hines was eager to jump on a newly developed asset in the neighborhood that’s also highly amenitized and accessible to transit. “In the absence of finding suitable land, we thought it was a great purchase,” he said.

In fact, competition was intense and Hines almost lost out to a higher bidder earlier in the year. But fortunately for Hines (less so for the bidder), the other buyer couldn’t line up the necessary financing given the economic volatility. “We swooped in, opportunistically, I would say,” Munk said.

The Houston-based Hines had previously made inroads in South Florida, purchasing the FAT Village development site in Fort Lauderdale in October 2021, where it is partnering with Urban Street Development to build a timber office tower. The group is also building twin 28-story condominium towers in West Palm Beach.

Update: This story has been updated with comments from Hines, and to reflect that the deal is the second largest multifamily deal in South Florida this year, exceeded by ParkLine, not the other way around.