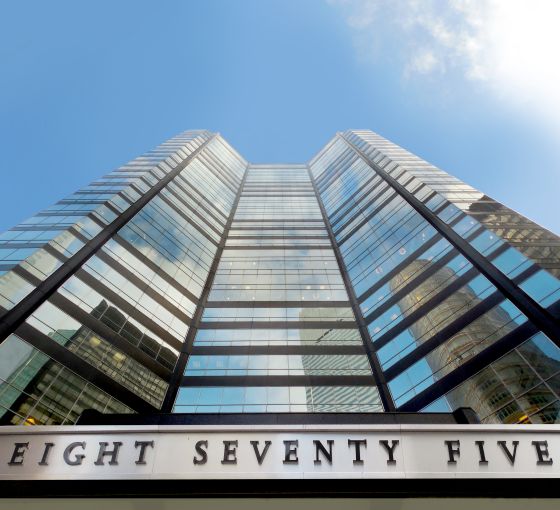 Law firm Kaufman Borgeest & Ryan is bidding adieu to its Lower Manhattan home at 120 Broadway after signing a 15-year lease at 875 Third Avenue.

The firm will be cutting its office footprint nearly in half from 48,000 square feet at Silverstein Properties’ 120 Broadway — also known as the Equitable Building — to 27,000 square feet in its new setup at Global Holdings Management Group’s Midtown East tower, The Real Deal first reported.

Asking rents were between $69 and $75 per square foot, and the firm will move to the entire fifth floor of 875 Third in March 2023, according to landlord broker JLL.

The law firm, founded in 1997, was previously a tenant at Global Holdings’ 99 Park Avenue before making the move to the Equitable Building.

The 29-story 875 Third, between East 52nd and 53rd streets, was built in 1982 by Robert Gladstone, will soon have Chopt as a tenant in the renovated lobby along with existing retail tenants I Tavolo, Starbucks and Dunkin, according to JLL. The three-story lobby atrium also has space leased to KUR Skin Lab, massage salon A’s Body Works and skin care product retailer Janet Sartin.

Paul Glickman, Diana Biasotti, Kristen Morgan and Harrison Potter of JLL represented Global Holdings in the deal, while Howard Greenberg of Howard Properties and Barry Lewen of Cresa handled it for Kaufman Borgeest & Ryan. Howard Properties and Cresa did not immediately respond to requests for comment.

“With over 600 linear feet of windows, 875 Third’s floor plates provide a uniquely efficient envelope for law firms,” Glickman said in a statement. “Along with the first-class amenities, transportation and ownership, the building offers an extremely attractive package for today’s tenants.”