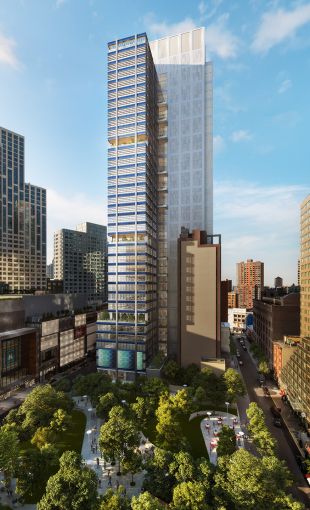 A trio of leases at the under-construction 1 Willoughby Square in Brooklyn propelled its occupancy rate forward after having only a single tenant signed on for years.

The organization will be joined by fintech firm Propel, which agreed to the entire 17th floor of the building, which is located near MetroTech, according to landlord JEMB Realty. Propel is geared toward money management for low-income people and will relocate from nearby 397 Bridge Street.

“We were immediately drawn to the high-quality offices at 1 Willoughby Square,” Ursula Lopez-Palm, director of people operations at Propel, said in a statement. “The incredible light, air and views create a one-of-a-kind workplace experience.”

Haley Fisher, Helen Paul and Jason Kroeger of Cushman & Wakefield represented Propel. C&W did not immediately respond to a request for comment.

Walnut Ridge, a nonprofit and philanthropic organization, also signed a lease for 5,000 square feet on a portion of the 16th floor. Whitten Morris and Joseph Sipala of JLL represented the firm.

The length of each lease was not disclosed but asking rents in the building range from $69 to $85 per square foot, according to JEMB Realty who was represented by Neil King, Paul Amrich, Zac Price, James Ackerson and Alex D’Amario of CBRE.

“The activity at 1 Willoughby Square highlights a broader trend of Brooklyn-based companies looking to elevate their workspaces to encourage employees to collaborate in-office,” King said in a statement. “The amenity center at 1 Willoughby Square is of a quality of trophy-caliber towers in the plaza district, which is central to the success of today’s workplace.”

Representatives for JLL, OPEN and Transwestern did not immediately respond to requests for comment.

The transactions puts the 500,000-square-foot building designed by architectural firm FXCollaborative, which became the anchor tenant when it took 40,000 square feet in 2018, at about 50 percent leased, according to JEMB Realty.