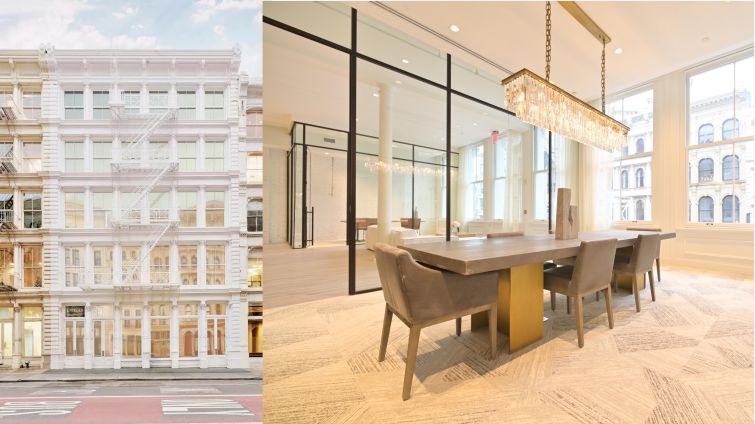 Exterior and interior of 446 Broadway after renovation. Photos: Courtesy of KPG Funds

Where tenants and developers see only Class B or C buildings on the losing end of a flight to quality pattern toward the 1 Vanderbilts of the world, KPG Funds CEO Greg Kraut sees opportunity.

These aging and oft-overlooked structures, usually in Midtown South or Lower Manhattan, are where Kraut has been putting money, polishing their old-world beauty into unique, boutique commercial space. And the investment has been followed by returns, according to the KPG Funds founder.

“We take Class C buildings, but ones that are architecturally significant — high ceilings, cast iron, lots of light — in areas that see a lot of tenant demand,” Kraut told Commercial Observer. “Mostly for a midsized tenant, which would be the 5,000- to 20,000-square-foot tenants, who still want to be able to recruit and retain talent while giving them an unbelievable experience when they get to the office.”

The market is alive and well for buildings with a prewar legacy, and sometimes those are not so easily found, according to Kraut. Sometimes, layers of renovations need to be excavated before the original layer, if it was not removed along the way, reveals the true potential of a building. Other times, the buildings with more obvious potential have been owned by a single family for decades — and they’re not ready to part with the asset.

“You pull back the onion, you see these beautiful gems,” Kraut added. “For instance, we bought 132 West 14th Street from the Salvation Army. Most people didn’t see what was behind the ugly brick that was in front of it. You saw this unbelievable architecturally significant 1930s-style building.”

Kraut’s firm tends to look at the buildings that are known to have history in districts that play well in the office market. Midtown South on 14th Street fits this description where the neighborhoods of Union Square, Greenwich Village, Alphabet City and the East Village converge. Historically, it started as an upscale part of the city, which is reflected in its architecture.

The last owner of 446 Broadway, who spent much of his time abroad, invested little in the building. But the mid-block location with a 30-foot setback in the rear of the building meant all-day sunlight for potential tenants. Big windows were installed in the front and back along with new elevators, and a renovated lobby met the demands of workers with health and wellness in mind, according to Kraut. The building is now known as L’Atelier, where the average floor plate is 7,463 square feet and the ceilings are between 15 and 19 feet. It cost the firm $45 million to acquire the building and $20 million for the renovation. Currently, all but one floor is leased.

“There are very few owners like us who are willing to do the smaller projects, but renovate these assets that need a lot of handholding,” Kraut said. “With the Landmarks Preservation Commission and the Department of Buildings, most people are scared to renovate these smaller buildings.”

These government agencies can be less of an obstruction and more of an ally.

“The LPC appreciates what we do and how we do it,” Kraut said. “But if you don’t know how to properly navigate Landmarks and the Department of Buildings, and if you can’t be patient and deliver a superior product with professionalism, bring aboard the right consultants, it can be a very challenging process. Landmarks is great because it keeps the neighborhood and the definition of the neighborhood intact.”

The margins are good in this asset class as well, according to Kraut, especially as tenants flee older buildings for new Class A space up toward Midtown proper. KPG Funds is currently buying these assets at 50 percent to 60 percent below where they were priced before COVID-19, and the buildings are getting the same rental rates per square foot as they were before the pandemic.

“So, for us, there’s huge margin expansion in our business. The problem is we can’t find enough quality buildings to buy,” Kraut told CO. “It’s so hard to purchase office buildings in New York City, and most of them are still dominated by large families that just don’t sell their product that when something comes on the market, it becomes a feeding frenzy.”

Some of KPG’s big tenants include celebrity jeweler and body piercer Maria Tash, who leased 16,910 square feet at 2 Crosby Street in 2019, and Santa Monica-based film company Cabin Editing, which took an entire floor at 446 Broadway in July 2021 at an asking rent of $120 per square foot, Commercial Observer reported at the time.