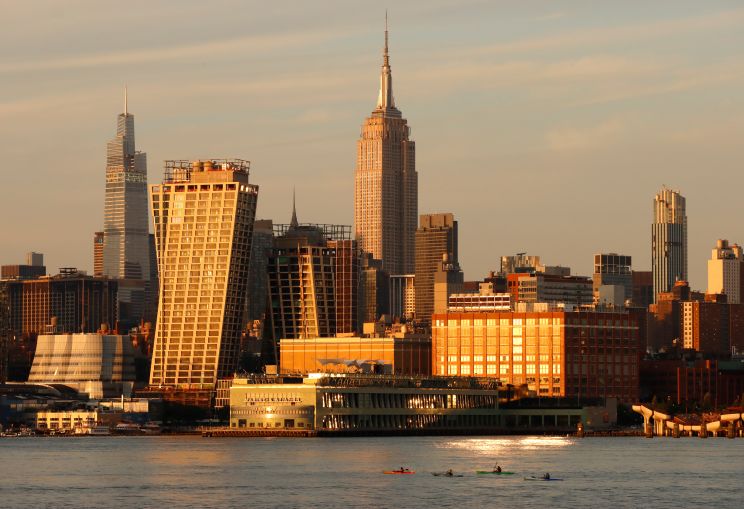 Sustainability efforts at the Empire State Building were a focus of the forum. Photo: Gary Hershorn/Getty Images

The panelists cited New York City legislation, most prominently Local Law 97, as a framework for sustainability efforts. Regardless of a company’s own interests or plans, such legislation places buildings toward the forefront of decarbonization and climate neutrality efforts. New York City therefore needs to get creative to employ a variety of solutions, from evaluating fossil fuel usage to retrofitting buildings. After all, approximately 70 percent of the city’s emissions come from building operations, said Reed.

Yet, even if legally imposed, sustainability upgrades are not negatives but positives, Schneider said. She pointed to the opportunities — namely, collaboration and relationships — that environmental changes invite.

Schneider has experienced the results of partnership firsthand. She has been working alongside Reed to help ESRT’s Empire State Building achieve its goal of carbon neutrality by 2030. Meanwhile, ESRT’s entire portfolio hopes to achieve carbon neutrality by 2035. Setting goals contextualizes short-term efforts, placing day-to-day measures within the big picture.

“A long-term phased approach to decarbonization that invests in decarbonization alongside the natural investment cycle of the building is the optimal way to achieve significant energy and carbon reductions at commercially acceptable returns,” Reed said.

The emphasis here is on the long term; Schneider noted that carbon-neutral goals should neither be taken lightly nor rushed. Goals must not only be productive, but also realistic and well informed. For example, committing the Empire State Building to carbon neutrality by 2030 required intensive planning via analysis, technical considerations and economic rationale.

In working toward these long-term environmental goals, Schneider also noted that partnership isn’t limited to direct business relationships. Rather, real estate leaders have a responsibility to boost other companies and buildings in their climate efforts. To show other firms how the Empire State Building is working toward carbon neutrality, Empire State Realty and NYSERDA have created a playbook of actionable steps.

Such a playbook proves that being proactive begins, as always, with information. Collecting data, parsing it, and subsequently utilizing it is an intimidating, multistep process — but one all three panelists believed necessary.

“You can’t manage what you don’t measure,” Donnelly said, summarizing the CPC’s mentality when it comes to making informed decisions.

The second panel echoed this need for a data-centric approach. In “The Transition to Net Zero: The Critical Role of Data, Energy Efficiencies & Climate Action Crusaders,” Sonu Panda, CEO of software company Prescriptive Data, moderated a conversation with Ben Myers, vice president of sustainability at developer Boston Properties, and Becca Rushin, director of ESG for investment and management firm Jamestown.

Data has become a critical tool in pushing toward carbon neutrality first, and net zero next, said Panda. He noted that data can — and should — be leveraged to propel decision-making and increase efficiency.

As data becomes more and more accessible, sustainability has continued to rise to the forefront of the real estate industry.

“Years ago I was begging people to get involved in the conversation, and there were way fewer cheerleaders and people with specific expertise,” said Rushin. “Whereas now my phone’s ringing.”

Indeed, ESG-related roles have shifted. Rushin’s job no longer requires her to drum up support for sustainability or raise awareness of environmental concerns. Instead, she must effectively harness the information and interest that’s already out there.

“I absolutely feel that that dynamic has shifted from headwind to tailwind,” Myers said. He noted that Boston Properties has had increasingly more stakeholders reach out to understand energy consumption and sources, as well as what properties are doing to reduce their carbon footprints.

With such widespread interest, both Myers and Rushin believe decisions should be made in accordance with intentional sustainability frameworks rather than randomized upgrades. While proactivity marks an improvement from years past, it also comes with its own challenges — and pressures.

“We have to move further faster,” said Myers.

Knowing how to allocate time, energy and resources is therefore a balancing act that requires intentional planning and perspective. To devise such a strategy, business interests and environmental practices must be considered in tandem.

The third panel — “Sustainability Spells Good Business: Understanding The Broader Benefits of Carbon Neutrality and Sustainable Best Practices” — surveyed the ways in which sustainability and business overlap for the better.

In addition to accounting for tenant needs, businesses must account for changing needs.

“In this era of uncertainty, I think flexibility is the word of the moment,” King said.

Even when well informed, a building’s design may not hold up in the future — and, in a world in flux, not being able to anticipate is anticipated. Allowing a building room to grow and change is therefore a crucial step that will save time, money and brain power years down the line.

Building off this sentiment of flexibility, the event concluded with a round-robin summarizing sustainability’s overlap with good business.

For Goehring, sustainability is simple. It’s all about “efficiency,” he said, summarizing sustainability’s boost to business in one word.

Yet efficiency is just the tip of the anti-climate change iceberg. Longevity is another key advantage of enacting pro-environmental measures. Both Whitney and Worden noted that green practices lower a building’s risks early on and can yield long-term successes, even if the output isn’t immediately noticeable. Such practices distinguish a building from its competitors and appeal to tenants and investors looking toward the future.

Clearly, real estate can — and must — do it all. The industry doesn’t have to choose between sustainability and business; rather, any firm hoping to remain competitive must manage both, sooner rather than later. Otherwise, a firm risks harming the environment, not to mention its own finances.