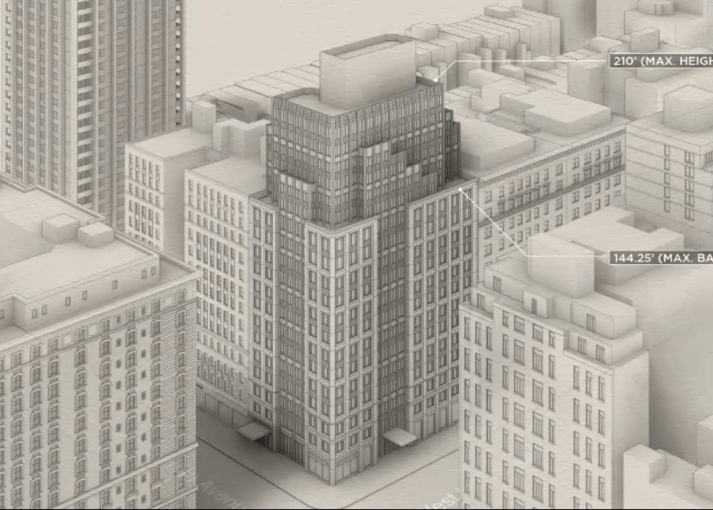 Daniel Kaplan, senior partner at FXCollaborative Architects, presented their proposal for the residential building that could replace the West-Park Presbyterian Church on the Upper West Side during a June 14, 2022 LPC hearing. Photo: Screenshot/ LPC via Youtube

The Landmarks Preservation Commission (LPC) has begun its review of a hardship application for an Upper West Side church to have its historic designation removed, something the church is pushing for but the local community board shot down.

LPC Commissioner Sarah Carroll told the public in a Tuesday hearing that the preservation commission would not make any sudden changes to the West-Park Presbyterian Church’s designation, with site visits planned and a decision expected in about a month.

“I want to start out today by letting everyone know that this will be a very robust and methodical public hearing process,” Carroll said. “[We will] absorb everything that we’ve heard. … And we will keep the public apprised of each step as we move through the process.”

The hearing comes after Manhattan Community Board 7 last week rejected the hardship application — needed to strip the 140-year-old church of its landmark protections — by a vote of 24 in favor, 13 opposed and seven abstentions.

In April, West-Park, under the leadership of its administrative commission chair Roger Leaf, filed a hardship application with the LPC to lose its historic designation so it could sell the church to Alchemy Properties, which plans to raze the structure and replace it with a market-rate housing tower with a 10,000-square-foot space for West-Park to continue.

West-Park’s parish has shrunk to just 12 people, and the building has fallen into ruin. A sidewalk shed has been around the building for at least two decades because the crumbling facade poses a public safety risk, with the New York City Department of Buildings listing 60 open violations for the address at 165 West 86th Street.

Leaf estimates the repairs would cost $50 million. He said the only choice would be to lose its landmark designation — which the church fought against in 2010 — and sell it to a private developer, who would give West-Park $8.8 million to outfit its new worship space.

But preservationists and politicians, namely Councilmember Gale Brewer, have said their own repair estimates put the costs closer to $20 million, and they started a fight to save the historic property.

“It is really important to be vigilant as a society when religious landmarks are threatened because they are readily adaptable,” Brewer said during Tuesday’s hearing. “We have a nonprofit that is still there every day. The walls are not falling down on top of anybody.”

Brewer also claimed that all the publicity surrounding West-Park has led another church to express interest in buying the property. She concluded her remarks with a criticism of some of the designs put forth by the developers during the hearing: “I want to point out that this quote-unquote new building, with all due respect, is ugly.”

Alchemy Properties, which acquired the tower portion of the Woolworth Building for a residential condominium conversion and spent $23 million on the terra-cotta facade alone, was at a loss as to how to save West-Park’s church in a financially viable way, according to Kenneth Horn, president of the firm. Leaf’s congregation approached them in January 2021 to examine the structure.

“Our initial desire — our initial concept — was to figure out a way to use portions of the existing church to build a new building. … We realized that the building was in really horrible condition,” Horn said during the presentation. “We did not go into this project even knowing what a hardship application was. However, because of the safety and impossibility of repairing a sandstone building in its current condition … the only option was, unfortunately, to take the building down.”

This determination was made after six to eight months, according to Horn.

Richard Lefever, president of architect FacadeMD, said during the hearing that the porous sandstone used in the building’s construction made it difficult to stabilize, repair or replace sections of the exterior walls. Up to 500 stones would need replacement on the south and west facades alone.

Daniel Kaplan, senior partner at FXCollaborative Architects, said the building lacks simple fire safety infrastructure such as sprinklers and proper modes of egress in the main assembly areas. With repairs and labor overhead from running the site, Kaplan estimated a cost between $32 million and $49 million to repair it, not including real estate taxes.

Adam Wald, executive vice president of Appraisers and Planners, told the LPC that a multifamily development would be the best option for developers to justify the cost of the project, compared to converting the church into housing or turning the property into a commercial building.

Andrea Goldman with New York Landmarks Conservancy referenced a 2011 report by its organization outlining the condition of the building. Goldman said structural deflection of the trusses and movement did not cause any plaster cracking. Instead, the culprit was a three-year period in which the church sat vacant without heat. This report was done as the conservancy provided technical support and grants to West-Park since 2001, Goldman said.

The Center at West Park, a nonprofit that rents space from the congregation, said the congregation previously refused offers to help fund renovations. After completing an appraisal of the building with the intention to purchase it from the parish, the church was valued at no more than $5 million. It offered that amount to the congregation but was turned down, Zachary Tomlinson, who runs the organization, told Commercial Observer in May.

Leaf’s response to this was that there has never been a “serious offer” to buy the church that would have been acceptable to the congregation and the Presbytery of New York City, the organization in charge of Presbyterian parishes across the city. The most that has ever been raised for the church to conduct repairs was $30,000, according to Leaf.

The congregation that built the church was founded in 1852 as the 84th Street Presbyterian Church and started with a humble wooden chapel on West 84th Street and West End Avenue. In 1882, the parish bought the land where the church now sits, and architect Leopold Eidlitz was commissioned to design a small brick chapel on the eastern end of the site, according to LPC records. Henry Kilburn was then hired to design a larger church to accommodate the influx of worshippers.

Only 19 hardship applications have been filed with the LPC since its creation in 1965. The agency granted 13, denied four and didn’t act on two, according to the commission.