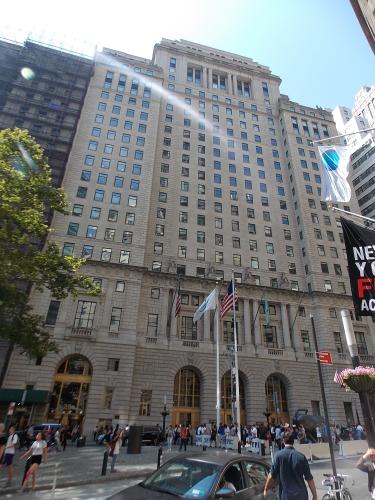 Industrious plans to set up shop in a Financial District building vacated by WeWork.

The flex office provider signed a partnership agreement with Wolfson Group to open a 44,000-square-foot outpost in the Cunard Building, with about 350 seats, the company announced Tuesday. The site is scheduled to open in July.

WeWork occupied 86,000 square feet in the building, otherwise known as 25 Broadway, for eight years until 2021. Unlike WeWork, Industrious enters the building at a time when landlords of Class B and C properties are starting to see coworking as a hedge against flight to quality.

But the partnership appears to be less motivated by a slow return to offices as it is about Industrious seeing a strong market for coworking space in New York City.

“New York is one of our strongest markets and we are excited to grow in FiDi,” Doug Feinberg, a senior director of real estate at Industrious, said in a statement. “This location will provide members with the ability to work in a high-traffic area with access to public transportation, bustling dining options and entertainment.”

This isn’t the first time Industrious moved in on former WeWork territory. Earlier this month, Industrious announced plans to open a 25,600-square-foot space at 111 West Illinois Street in Chicago that WeWork previously had a location in, The Real Deal reported.

Besides the obvious pitfalls for the commercial leasing industry due to COVID and remote work, WeWork has been struggling financially for some time with the company cutting back on expenses by as much as half in 2020, Commercial Observer previously reported. It ditched its 25 Broadway outpost as part of its effort to cut its massive cash burn and turn a profit.

That strategy seems to be paying off for the company founded by Adam Neumann. In the first quarter of 2022, WeWork’s revenue outpaced its net losses for the first time since 2020. It still lost $504 million, but that was a 37 percent drop compared to the previous quarter.

A spokesperson for WeWork did not immediately respond to a request for comment.