Cherry Valley Marketplace Takes Another 8K SF in the Bronx 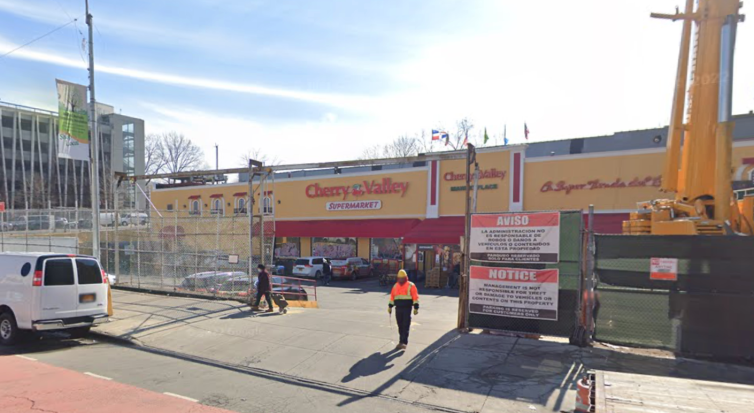 Cherry Valley Marketplace took another 8,456 square feet for its grocery store at the base of a Bronx affordable housing development.

The grocery store signed a 40-year term with Douglaston Development to grow its presence to 20,000 square feet at 2856 Webster Avenue and 410 Bedford Park Boulevard in the Bedford section of the Bronx after signing on for 12,373 square feet in July 2021.

Cherry Valley has sold groceries in this location for over 14 years, but the new agreements are for space that will be built out as construction of 467 units of affordable housing at these addresses are completed, according to Douglaston.

“Ensuring Cherry Valley Marketplace’s continued operations in the neighborhood has been of great importance as it provides a much-needed food offering to the Bedford community,” Russell Lang, senior vice president at Douglaston Development, said in a statement. “With limited grocery resources in the surrounding area, we’re thrilled that this local business can continue to thrive and play a vital role in the community for years to come.”

This was a direct deal between Douglaston Development and the grocery store, and the asking rent was not disclosed. Cherry Valley did not immediately respond to a request for comment.

The New York Botanical Garden and Douglaston Development announced plans to develop the corner addresses in February 2020 when Douglaston’s Jeffrey Levine signed a 99-year ground lease with the garden to redevelop an acre of land previously occupied by low-rise commercial buildings.

The first phase of the plan consists of a 188-unit senior housing facility at 2856 Webster while the affordable housing portion would be reserved for people earning up to 50 percent of the area median income (AMI), or $37,750 a year, Commercial Observer reported at the time. On-site social services will be provided by Fordham Bedford Community Services.

The second phase of the plan at 410 Bedford Park will include 230 affordable apartments for families earning 50 to 130 percent of AMI.

An 88-block rezoning in 2011 allowed the developers to build as high as 11 stories on its Webster Avenue sites, and an extra floor was allotted to the development through a Food Retail Expansion to Support Health zoning bonus from the New York City Department of City Planning.