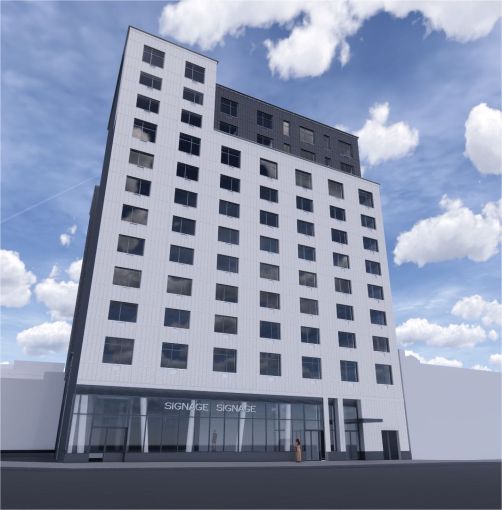 As the Brooklyn Botanic Garden fights a development in its own neighborhood, New York Botanical Garden is planning to build affordable housing on its property in the Bedford Park section of the Bronx.

NYBG has teamed up with Douglaston Development to build two residential towers with 450 affordable apartments along Webster Avenue by Bedford Park Boulevard, Douglaston announced in a press release.

The development firm led by Jeffrey Levine inked a 99-year ground lease with NYBG for an acre of land that’s currently home to a series of low-slung commercial buildings on the northwestern edge of the garden.

The first phase of the project will include a 188-unit senior housing facility at 2856 Webster Avenue, with affordable units for people earning up to 50 percent of the area median income (AMI), or $37,750 a year. And residents will have access to on-site social services provided by Fordham Bedford Community Services. The second phase will bring 230 affordable apartments—affordable to families earning 50 to 130 percent AMI—to a site next door at 410 Bedford Park Boulevard.

The development will also hold a new, 20,000-square-foot location for Cherry Valley Supermarket, which currently operates a store at the corner of Bedford Park Boulevard and Webster Avenue. Douglaston exec Russell Lang told neighborhood paper Norwood News that the grocery store will continue to operate during the first phase of construction until it can move into its new store on the ground floor of 410 Bedford Park.

NYBG can build up to 11 stories on its Webster Avenue sites, following an 88-block rezoning [PDF] of the area approved in 2011. However, it expects its new project to reach up to 12 stories with the help of a FRESH zoning bonus from the Department of City Planning, which gives developers extra floor area in exchange for including a grocery store, per Norwood News.

The garden had originally planned a hotel and residential project as part of a request for proposals issued in 2016, but it backed away from the hotel part of the development. A spokesman for the garden didn’t immediately respond to a request for comment.

“Douglaston is thrilled to begin a new partnership with The New York Botanical Garden on this community-driven development,” said Jeffrey Levine, the chairman of Douglaston Development. “We are looking forward to continuing to expand upon our Bronx footprint through a project that will not only bring more affordable housing options to the area, but additional benefits to the greater community.”