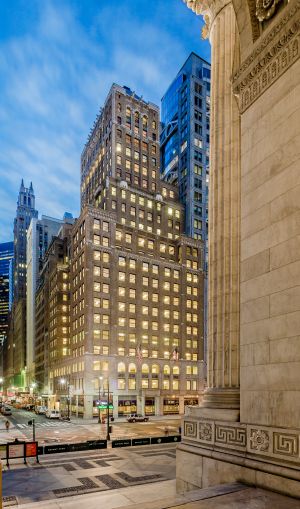 The $290 million sale of the Midtown office building closed Thursday, with RFR locking down $260 million in balance sheet financing for the acquisition.  Citigroup and JPMorgan were the senior lenders in the deal, with PCCP in the mezzanine spot.

Bloomberg first reported that a sale of the 1920s-era property was in motion in October. The transaction was heralded as a test for New York City’s office market, which has favored newly constructed Class A product post-pandemic. As one source familiar with the trade put it, “The deal terms held up, which is a very positive sign.”

Designed by Starrett & Van Vleck, 475 Fifth Avenue opened its doors as the Farmers Loan & Trust Company Building in 1926. The building sits in a prime position, across the street from the New York Public Library at Bryant Park —the library’s two lion statues, Patience and Fortitude, facing it— and close to Grand Central Terminal. Nuveen acquired the asset in 2011 from Barclays, completing $60 million in property upgrades by 2014.

Today, the building is almost fully leased to a diverse roster of tenants including Penske Business Media, Torchlight Investors and LBB Industries, which ​​signed a five-year lease for the entire 4,126-square-foot penthouse floor of the building in June 2021.

RFR has been bringing the Miami heat, too. Only last month, the firm dropped $25 million on a Biscayne Boulevard parcel adjacent to a 17-story hotel it bought only a week earlier.