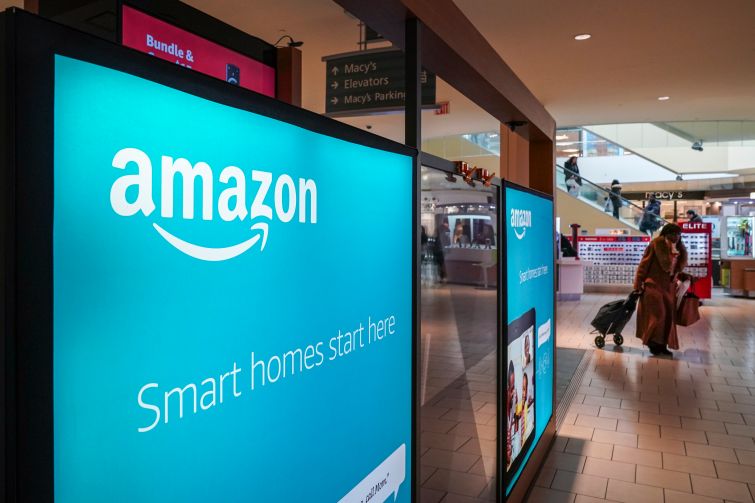 An Amazon pop-up kiosk in Queens. The threat to brick-and-mortar retail from e-commerce predates the pandemic. Photo: Drew Angerer/Getty Images

One brand spearheading success in this pandemic-hit sphere is Allbirds, a sustainable footwear retailer that recently leased 8,000 square feet at 120 Fifth Avenue. CO’s Max Gross moderated a discussion between Joey Zwillinger, co-CEO of Allbirds, and Nicholas Haines, CEO of Allbirds’ landlord, developer The Bromley Companies. They highlighted the need for retailers like Allbirds to maintain symbiotic relationships with both customers and landlords.

“We do really ask something of landlords to commit [to] and share our vision,” said Zwillinger in the forum’s opening fireside chat, entitled, “How One of Today’s Most Innovative Brands Is Driving a Brick-and-Mortar Expansion.” 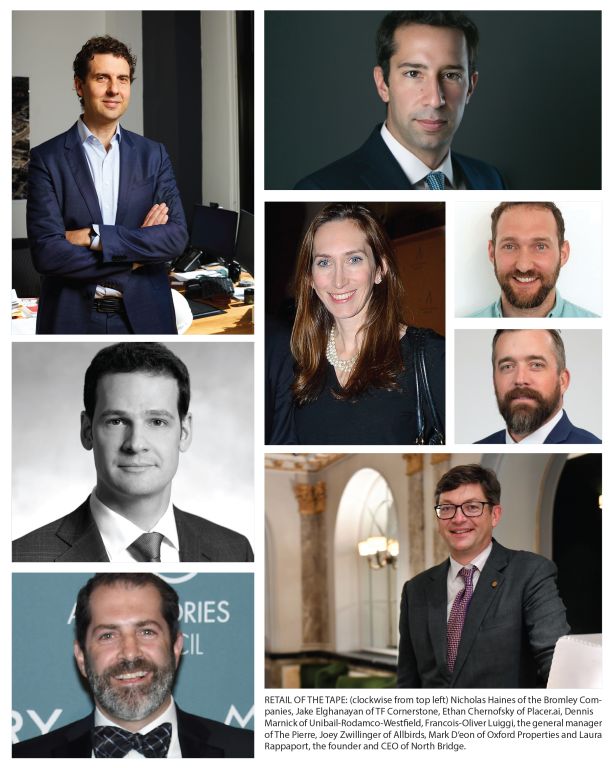 The Bromley Company and Allbirds have established a shared vision. The landlord experimented with different building objectives, adjusting 120 Fifth Avenue’s efficiency upgrades to meet sustainability standards, Zwillinger said. This tenant-landlord alignment of values has created opportunities beyond shoe sales, as Allbirds ultimately aims to reach not just climate neutrality but also climate positivity. Such a goal requires readjusting all areas of retail — from physical building efficiency, yes, but also to the brand’s manufacturing, production and shipping techniques.

As such, retail’s success isn’t necessarily dependent on the product for sale or even the leased space itself. Rather, retail’s output hinges on a brand’s ability to utilize its surroundings to express itself to customers. Allbirds deliberately chose its Flatiron District locale for the environment. The area speaks to the company’s pillars for sustainability and consumer connection. As a bonus, Microsoft also leases space in the building, which Haines anticipates will drive further traffic to Allbirds.

The panelists spoke about the future of malls. While it’s widely acknowledged that the pandemic accelerated the demise of the American shopping mall, the growing desire for shopping experiences has opened the door for malls to make a comeback, albeit repurposed.

“It’s really about creating an experience that’s long-lasting and creates a better opportunity for the consumer to really have a whole, holistic experience there,” Weitz said.

Realistically, customers won’t gravitate to malls for their directory of department stores or singular ticket items. Rather, they’ll visit shopping centers for a day out of the house. If malls can provide experiences that speak beyond apparel — perhaps addressing fitness or wellness offerings instead — malls can reinvent themselves to fulfill market needs.

These potential opportunities reject previous predictions for retail, made both before and during the pandemic. Prior to COVID-19, the narrative of the retail apocalypse began to take shape, in which the rise of e-commerce was widely expected to overrule in-person retail altogether. Yet, as Chernofsky noted, what should have been the most significant challenge for brick and mortar — the pandemic — has opened up new avenues for growth.

The panelists agreed that retail is subjective. It depends on each community and boils down to a simple question: “What does the customer want?” Marnick said. “That’s really what the basis of the story is.”

Determining customers’ wants, however, is a delicate act. As communities grow and advance, national chains are more likely to take over neighborhoods, with the potential to change the original character. Epstein used the example of SoHo, an arts district once full of mom-and-pop shops. In recent years, the trendy neighborhood has strayed from its roots, replacing its unexpected and characteristic hidden gems with heavy-hitter retailers.

The Meatpacking District is taking careful steps to avoid this same fate and ensure that its character remains intact. Social media has proven a helpful tool for sharing the spirit of the community, Epstein said, noting that Instagram has provided a means to keep in touch with potential visitors and share local stories indicative of the area’s heart.

This digital component isn’t enough to sustain the neighborhood, however. Like retail at large, the physical must work in conjunction with online offerings. Simple changes to the streets, such as sprucing up cobblestones or increasing daytime security, can have large-scale implications that draw in — and maintain — a satisfied community.

Fifth Avenue has taken similar steps to attract visitors to its retail by creating a more desirable external environment. Last spring’s “Fifth Avenue Blooms” saw the installation of 7,000 flowers spread over the avenue. This effort enticed visitors to linger outside, Pennyfeather said, while also capitalizing on what the moment’s retail and its surroundings can create.

“We really wanted people to have this journey on Fifth Avenue,” Pennyfeather added.

People — potential customers — are at the core of these changes to retail, as well as shifts throughout the still-recovering tourism and hospitality industries. Jack Pulvirenti, an audit partner at accounting, tax and consulting firm Berdon, moderated the panel, “Hungry for Hospitality: A Deep Dive Into the Return of Travel & Tourism.” He spoke with Sean Breuner, CEO and founder of hospitality platform AvantStay; Francois-Olivier Luiggi, general manager at The Pierre; and Laura Rapaport, founder and CEO of real estate solutions company North Bridge.

Like retail, hospitality has adapted to COVID-induced changes. When the pandemic hit in March 2020, The Pierre closed for six months. Upon reopening, the hotel had to adapt — quickly — and with a focus on domestic travelers looking for more long-term accommodations.

The hotel business model evaporated with the pandemic, Luiggi said. Perhaps the most notable change manifested in the duration of customer stays. Rather than book two-night getaways, guests at The Pierre booked an average of seven nights.

Such changes presented a unique challenge. Hotel rooms come with a given square footage, consisting of stagnant walls and set amenities: standard furniture, an unchangeable location, an already built layout, etc. Hotels therefore couldn’t change physically and instead had to readjust how they presented themselves to visitors.

Short-term rental platforms such as AvantStay were primed for this upheaval. AvantStay accommodates big groups for vacations, offering luxury sites that might otherwise be unaffordable. Rather than pay what might be exorbitant sums per night, groups can instead split the cost among themselves. Widening the opportunity to experience luxury housing has raised the bar for hospitality, allowing groups to come together safely, spatially and seamlessly.

“People want to be with people they like,” Luiggi said, noting that guests during the pandemic tended to travel in bubbles. Visitors have opted to stay within their family groups rather than turning to external forms of socialization.

Prior to the pandemic, Sartiano set out to create a space that would literally give its members space; he wanted to offer an environment where people could spread out.

“One of the promises I made people was that it would never get overcrowded,” Sartiano said.

His promise just so happened to align with consumers’ post-COVID wish lists.