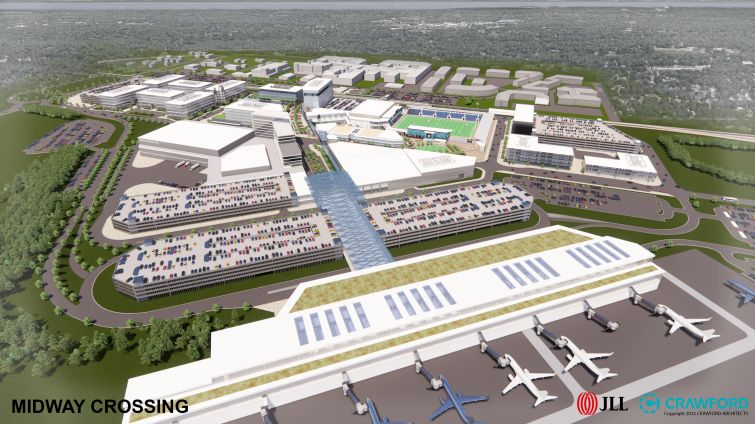 “New York City’s already made a commitment to life sciences with money being poured in by Alexandria, Longfellow [and] Deerfield, so we’re leveraging that and leveraging Long Island and its history,” said Derek Trulson, a vice chairman at JLL New York. “We believe that this has the ability to be as important a life sciences cluster as there can be around the country because of what it has to offer locally, but its connection to New York City is just as important.”

Demand for life sciences space in New York City reached a record high last year with 433,000 square feet leased, according to a March report from CBRE. Midway Crossing would be built 50 miles east of Manhattan.

Chicago-based JLL is developing the project as part of a public-private partnership with the Town of Islip and Suffolk County. In addition to life sciences, the major infrastructure initiative would include a hotel, convention center, sports arena and stadium. It encompasses 179 acres of underused and undeveloped land mostly owned by the town and county.

A walkable 1,800-foot corridor would link the Ronkonkoma LIRR station and MacArthur Airport as a major piece of the development providing a true “train-to-plane” dynamic, Trulson said. It also leverages more than $15 billion of investments the Metropolitan Transportation Authority has made in the LIRR’s East Side Access project to Grand Central Terminal and additional track space on the railroad’s main line that will enhance travel between the airport and Manhattan. The infrastructure initiatives all got a financial boost under the American Rescue Plan Act signed by President Biden last year.

“New York has some of the best health care systems in the entire world, and if they want to diversify and be in a location like this we’re gonna have a spot,” Trulson said. “We have the scale because we can do up to 1.4 million square feet, which will ebb and flow as the project gets defined through the public process, but we know that elements are there, and why it’s so powerful when you compare it to other life sciences clusters around the country is because of the transportation and access to New York City.”

Hockey Hall of Famer Pat LaFontaine, an adviser to JLL on Midway Crossing, said Long Island has a big opportunity to capitalize on New York City’s growing life sciences sector, noting that Boston’s stretches about 50 miles away to Worcester, Mass., a similar distance as Manhattan to Ronkonkoma. The project is estimated to yield 4,300 jobs in the STEM and health care fields.

“I think the ability to grow and the ability to have all this cluster here is great, and if you go one more stop on the train you are at Brookhaven National Laboratory,” said LaFontaine, whose 16-year National Hockey League career included stints with the New York Islanders, New York Rangers and Buffalo Sabres. “There’s an opportunity to take all the great assets of Long Island with many great institutions and combine them together in an unbelievable location between an international airport and one of the busiest train stations on Long Island.”

Other aspects of the Midway Crossing development include both indoor and outdoor sports venues that seat roughly 3,000 to 5,000 spectators and might attract minor league teams. JLL originally envisioned a 17,000-seat arena that could attract the NHL’s Islanders before the franchise instead opted to build a new arena at Belmont Park along the border of Nassau County and Queens.

The Long Island Regional Planning Council designated Midway Crossing a “project of regional significance” in mid-May, and Trulson said he hopes to break ground by early 2025. It is in the vicinity of another big Ronkonkoma project by Tritec that will see 1,400 new apartments, 360,000 square feet of office space, and 195,000 square feet of new retail.

“This is really a legacy project that doesn’t come around that often,” LaFontaine said. “I think it’s just going to elevate all of Long Island to really spotlight its greatest assets and in a transformative way for years to come.”