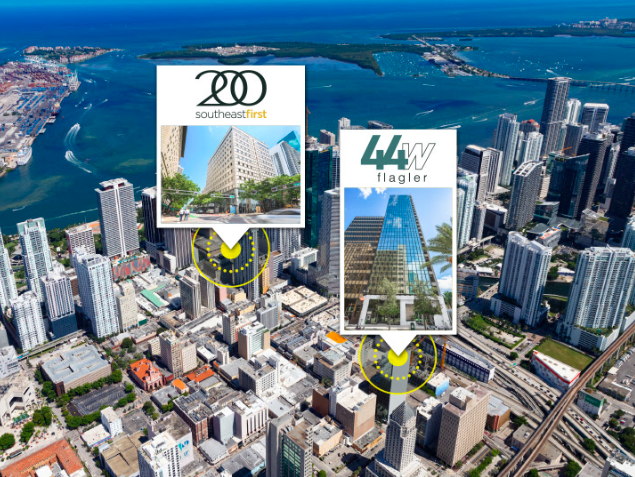 A pair of aging office buildings in Downtown Miami sold at a loss.

Triple Double Real Estate and Stonerock Capital Partners bought the two office buildings in Downtown Miami for a combined $56.7 million, according to Cushman & Wakefield, which brokered the transaction.

The larger property, also known as the Courthouse Tower, located at 44 West Flagler Street, spans 176,292 square feet. The 23-story building was built in 1974.

The smaller, 10-story building at 200 SE 1st Street totals 150,530 square feet and was originally constructed in 1958. It’s situated less than half a mile east of its sister building.

The trades mark at least a $4.7 million loss for the seller, Brickman. In 2016, the Greenwich, Conn.-based investment firm paid $33.9 million for the 1st Street building and $27.5 million for the Flagler Street tower, according to property records.

Brickman “substantially repositioned” the two-building portfolio, which is now 59 percent leased, according to C&W. The South Florida-based buyers will focus on bringing the properties to full occupancy.

C&W’s Mike Davis, Dominic Montazemi, Miguel Alcivar, Adam Spies, Rick Brugge and Rick Colon represented both the seller and buyer. A representative for Brickman did not immediately respond to a request for comment.

The neighborhood is home to a noticeable homeless population, but also to Miami Worldcenter, a 27-acre private development project that will house luxury retail, offices and residences.