Real Estate Starts to Use Blockchain for ESG Goals

The technology once seemed impractical, but at least one major landlord sees a future in using it for measuring carbon-cutting efforts 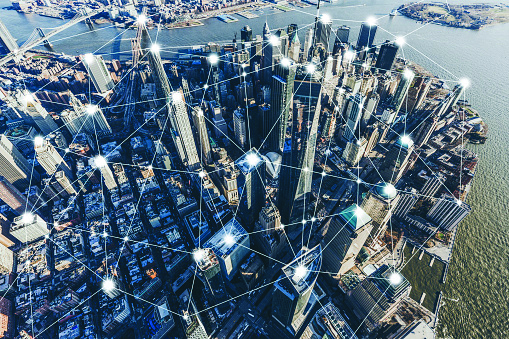 When distributed ledger technology, commonly known as blockchain, was first used in 2008, many who studied it concluded that it was “a solution in search of a problem.” In other words, other than its use as a tech platform for bitcoin, few could see the practical application of such a ledger system.

More recently, the real estate industry has found a particular use for blockchain in its environmental, social and governance (ESG) efforts to track and provide proof to investors, tenants and government entities of its carbon reduction progress.

The most prominent commercial real estate owner to have embraced blockchain as part of its carbon reduction strategy is Brookfield Properties, which in March announced a five-year agreement with Brookfield Renewable Partners to supply renewable electricity to One Manhattan West, the developer’s 67-story, 2.1 million-square-foot office tower located within Brookfield’s 8-acre, 7 million-square-foot development, Manhattan West.

One Manhattan West will be Brookfield’s first building in its New York City portfolio to be 100 percent powered by renewable energy. Brookfield Renewable, its sister company under corporate parent Brookfield Asset Management, will supply the electricity from its hydropower facilities in upstate New York, according to Brookfield. The companies switched to all renewables for the tower this January, they said.

And it’s being tracked on blockchain.

Brookfield is hardly alone in using blockchain for such a purpose, said Michael Daschle, senior vice president of sustainability at Brookfield Properties. “It’s certainly not unique to Brookfield, although I consider Brookfield a leader in the space. There are some other major landlords and companies like JPMorgan [Chase] for example, using this technology as well.”

“But it is definitely an emerging technical solution,” Daschle added. “The big picture context of why that’s important is that there’s such a global focus on achieving net zero carbon and making these claims about the use of renewable electricity in its various forms. Everyone wants to have an authentic way to prove that the statements that they’re making are legitimate and [that they] can back it up with detailed information about the source, amount, the date and quality of that particular energy.”

A report from McKinsey & Company in February highlighted the increasing importance to real estate owners of decarbonizing their assets and portfolios in order to maximize their investment value. “The climate transition not only creates new responsibilities for real estate players to both revalue and future-proof their portfolios but also brings opportunities to create fresh sources of value,” the report says. In addition, McKinsey research estimates that approximately $9.2 trillion in annual investment will be required globally to support the net zero transition.

Decarbonization information transparency is important to investors, owners, tenants and other key stakeholders, Daschle said. Before blockchain technology, owners like Brookfield would have to check their monthly energy bill from Con Edison and then go to the New York State Energy Research and Development Authority (NYSERDA) or New York Independent System Operator (NYISO) sites to try to figure out their renewable energy usage, whether from fossil fuels, hydro, nuclear or solar, on an annual basis.

Now Brookfield is partnered with and has invested in Austin-based Cleartrace, a decarbonization software proptech startup founded in 2019  that provides verifiable proof of energy delivery hourly.

“We can go onto the platform now for One Manhattan West, and our tenants can do this as well, where you can see for every hour of the day exactly where the energy that the building is consuming was actually generated,” Daschle said. “It aligns with this overall concept of 24/7 carbon-free energy. This platform is uniquely set up to be able to prove 24/7 carbon-free energy. It’s very difficult to back up that claim, but we can do that for every hour for every tenant in the entire building.”

The Cleartrace platform keeps the information on its blockchain, he added. That includes everything that would’ve been available before but also the particular mix of energy sources, down to the hour and location, to gauge carbon emissions.

“That’s all securely recorded with blockchain so that we can go back and have an immutable, auditable trail of everything that we’ve done in the past,” Daschle said.

The nuts and bolts of blockchain capability in carbon reduction tracking, as well as the overall growing importance of technology in this area, is of prime importance to Lincoln Payton, CEO of Cleartrace.

“Cleartrace builds carbon accounting and energy data management systems using a complicated tech stack that includes blockchain,’’ Payton said. “The uniqueness is the transparency, and high-quality, real-time data that is accessible, provable and immutable. There is a lot of talk these days about data and ESG. Not a lot of fact and metric-based backup to it. We are the antithesis to that.”

While the startup is providing Brookfield with a specific application for creating proof of decarbonization, which enhances the reputational and regulatory value of One Manhattan West, it can also be applied to an entire portfolio, Payton said.

The software company works on a subscription model, Payton said, noting, “We’re collecting data, packaging it all very elegantly in a discernible, usable application, and charging people like a Bloomberg terminal.”

More generally, the use of blockchain has moved from “flavor of the month” to a commonly embedded technology in real estate ESG, he said.

“The world has moved to the phase now where metrics and transparency are required,” Payton said. “It’s going to keep coming, that transparency in all things. ESG is the future. Technology has risen up to meet us in terms of IoT, metering, blockchain, the whole telemetry. We’re able to connect in real time to all points of generation.

“Blockchain is hot and sexy today. It may not be tomorrow, but the fact is, it’s useful. And it’s useful because it’s self-auditing, handles high volume really well [and] is immutable and accessible with permission.”

Adding to blockchain’s value is its role in proving an owner’s carbon reduction claims, Payton said. That could aid owners when carbon credit exchanges debut. And it is increasingly a matter of when, not if: New York City’s Local Law 97, which will fine owners of larger buildings for exceeding certain carbon emissions caps, starts taking effect in 2024.

“If you look forward to eventual carbon credit exchanges around Local Law 97,” Payton said, “you are looking at actual carbon exchanges between buildings that have a surfeit and those that have an adequacy of what their footprint is for regulation.

“All of that has to be moved to digitized trades. That’s a very interesting application as well, which we’re looking into additionally, because blockchain in the digital world is extremely well suited to that.”