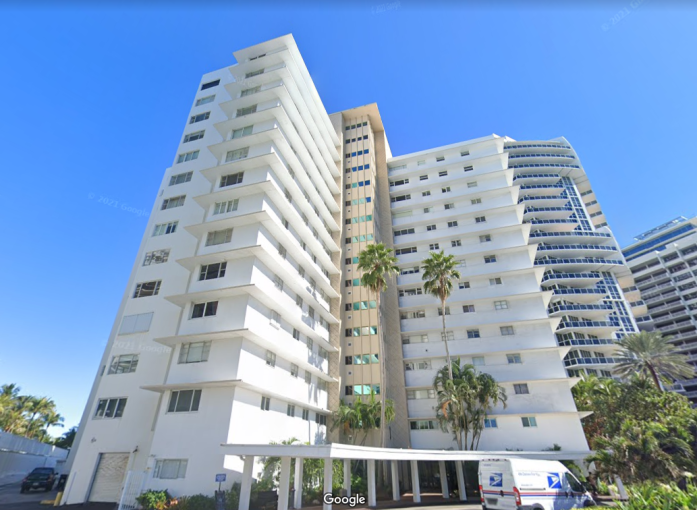 The joint venture owns 90 percent of all the units, records show. The firms are debating whether to terminate the condo association — which would grant them complete control of the property, paving the way for new development — or sue the holdouts to force a sale, said a source familiar with the dealings.

The move to buy out condo buildings is part of a growing trend among developers following the collapse of the Champlain Towers South condom that killed 98 people last year, coupled with the booming housing market.

Wanting to avoid a tragic fate, owners of aging condos in buildings similar in age or wear to the Champlain property, are increasingly looking to sell instead of paying for expensive repairs. That can potentially free up valuable oceanfront land for developers, who will buy all the units, tear down the property and build new luxury properties.

Carlton Terrace, built in 1956, sits in a prime location, facing the ocean at 10245 Collins Avenue in Bal Harbour, a wealthy town just north of Miami Beach.

The trio has yet to reveal plans for the property.

The acquisition loan comes only days after Related, Miami’s largest condo developer, put down an eye-watering offer for another oceanfront condo building down the road. The developer, along with 13th Floor Investments, offered to pay $500 million to buy Castle Beach Club in Miami Beach last week.

Representatives for Related and Rockpoint declined to comment, while spokespeople for Two Roads did not immediately provide a comment.

Boston-based Rockpoint is a national investor. Last year, it paid $117 million for an oceanfront resort in Fort Lauderdale that formerly housed the iconic Yankee Clipper hotel.