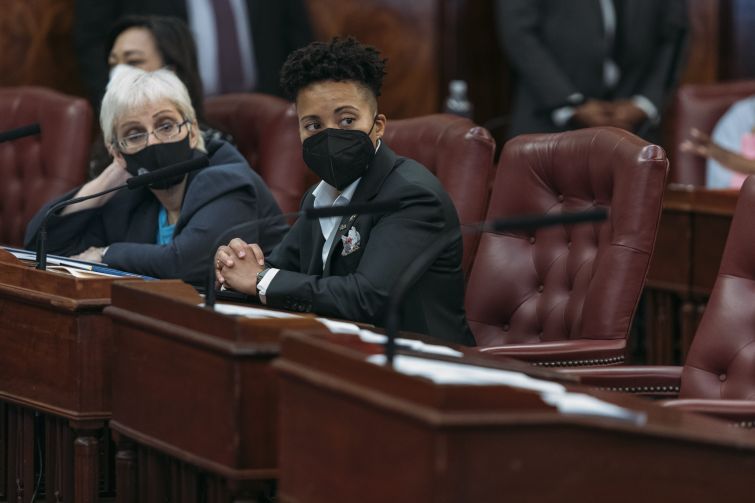 New York City Council on Thursday gave the thumbs up on two Prospect Heights residential buildings that were nearly shot down by the newly elected local council member.

EMP Capital’s development at 1034-1042 Atlantic Avenue and Y&T Development’s project at 870-888 Atlantic Avenue would bring a combined 438 apartments to the neighborhood and were approved after the developers listened to Council member Crystal Hudson to increase its affordable housing.

Under the revised plans, each developer committed to reserving 35 percent of the respective building’s floor area for families making between $38,000 and $57,000, 10 percent more affordable housing than is required under the city’s mandatory inclusionary housing law.

The measure allowing the developments to move forward passed the City Council by a vote of 49 in favor, one opposed, and one abstention, according to Hudson’s office.

“For too long, developers have driven the land-use and planning process in this city,” Hudson said in a statement. “They’ve convinced New Yorkers that affordability quotas and community demands will stifle development in a time when we need to build more to confront the growing affordability and housing shortage we’re facing. However, the truth is developers can stand to do much more.”

The approval process for these two projects started before Hudson took office in January. Upon being sworn in, Hudson made moves to halt the development unless EMP Capital and Y&T Development agreed to a better deal for the community.

As the City Council almost always votes in deference to the local council member on matters of land use, Hudson issued an open letter to the City Planning Commission stating that she would vote against the plan unless the developers went back to the drawing board on their proposals.

The last time the City Council did not vote in line with the local representative was in late 2021 when the New York Blood Center’s new 310 East 67th Street location passed despite opposition from former Councilmember Ben Kallos, who was term-limited with just weeks left in office.

As Thursday’s meeting came to a close, Hudson said she had managed to negotiate for a total of additional 150 units of affordable housing across both projects. Plans call for 228 units at 870-888 Atlantic Avenue and 210 apartments at 1034-1042 Atlantic Avenue.

The developers did not immediately respond to a request for comment.