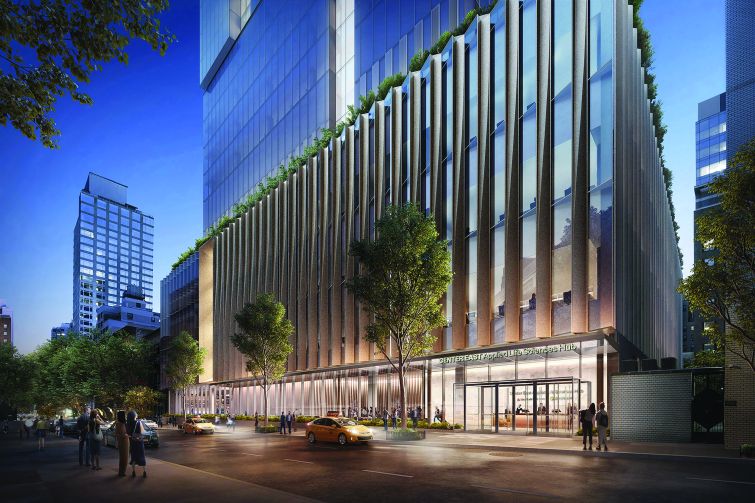 LAB SLABS: The Center East development for the New York Blood Center on Manhattan’s Upper East Side, which is expected to be finished in 2026, is indicative of larger-scale life sciences projects nationally. Rendering by DBOX

New York City Council took a vote to move forward with expanding the New York Blood Center’s 310 East 67th Street location by 233 vertical feet on Tuesday, a rare move in going against the local council member from the area.

The project is designed to expand the three-story Blood Center headquarters and add a 596,000-square-foot tower dubbed Center East to rent out to for-profit life sciences companies.

Expanding the center, which supplies up to 90 percent of the city’s blood supply, has boiled the blood of some Upper East Side residents. Opponents argued against the political dealings behind the Uniform Land Use Review Procedure (ULURP) and thought the project would block natural light in the neighborhood.

Ultimately, the vote passed by 43 in favor and 5 in opposition.

One key detractor in the plan to give the Blood Center a new home for the first time in 50 years has been Ben Kallos, the City Council member who represents the neighborhood. Kallos has claimed dishonesty from the de Blasio administration and the developer in the project as plans have progressed. Kallos has said that the Boston developer, Longfellow Real Estate Partners, has declined to meet with him, as well as Manhattan Borough President Gale Brewer and Community Board 8.

“To pave the way for this vote, which bucked member deference, much was done to paint me as an unreasonable NIMBY and the blood supply as at risk,” Kallos said. “Local council members don’t matter anymore and can no longer represent their communities.”

Mayor Bill de Blasio discussed the controversy surrounding the zoning map amendment on NY1’s “Inside City Hall” with Errol Louis Tuesday morning, pressing the need for the Blood Center not only for economic benefits, but also to serve as a supply line for the city.

“The goal is first of all, to make sure we have a stable blood supply for the city. That’s what the Blood Center does,” de Blasio said. “We need to guarantee their physical future, their financial future. It’s a really important organization for the city, and we saw during COVID times when the blood supply got really low, so that’s one imperative. But the second is life sciences, which is both about cures and new medicines that will save lives, but it’s also about the future of New York City and its economy. We need to be the life sciences capital.”

Louis asked the mayor about allegations of a conflict of interest in the effort – the Blood Center’s attorneys at Kramer Levin are owed more than $400,000 from their legal representation of de Blasio in the past – but de Blasio said such claims were false.

“They’re not, you know, a classic big corporation or a real estate firm. I mean, they’re there for a good cause. I don’t know what happened with the dialogue,” de Blasio added. “It’s a specious claim, it’s just not accurate. I care about the Blood Center because I care about the Blood Center and I care about life sciences. I’ve been talking about it for years. We put out a plan years ago. I didn’t even know who their representation was, honestly, until very late in this process. So, it had nothing to do with it.”

Borough presidents and community boards only get an advisory say in the ULURP, with the majority of power being in the hands of the full body of the City Council and the mayor’s signature. However, most council members follow the lead of the local member with their votes.

Councilmember Carlos Menchaca came out in support of Kallos, who he believed was not represented in the plan and may have been portrayed in a negative light because of his opposition: “Ben, you’re not alone.”

Only about five of the 16 stories in the new building will be occupied by the Blood Center, while the rest will go to other life science organizations rented out by Longfellow. While the center could get up to $450 million in tax breaks, it has also committed to donating $500,000 to local community groups dedicated to fighting sickle-cell disease.

The Blood Center had the strong backing of the council’s Black, Latino and Asian Caucus, which is composed of 23 of the city’s 51 council members. It only needed 26 votes in the affirmative to approve the development.

The rezoning will now go to de Blasio’s desk for full approval. Construction could begin in 2022 and finish as soon as 2025, Commercial Observer previously reported.