A proposed replacement is not in the plan, either, that Gov. Kathy Hochul and lawmakers hammered out 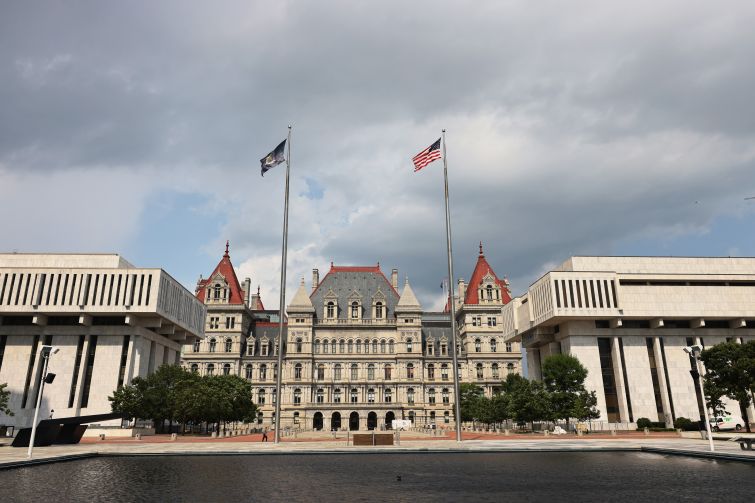 It took an additional week of closed-door negotiations to hammer out differences on housing, the hospitality industry, and criminal justice policies, but Gov. Kathy Hochul announced Thursday afternoon that she had reached a deal with her legislative counterparts over the state’s $220 billion budget.

“It was worth the time to get this right for New Yorkers,” Hochul said at a press conference in Albany. “Seven and a half months ago, I said we’re going to do things differently.”

Hochul hailed the new budget as the result of a “phenomenally collaborative process” after promising when she was sworn into office last summer to “do things differently” than her predecessor. She proposed a $216 billion budget in January but the governor’s moves to insert new measures into the proposal near its April 1 deadline, including changes to the state’s landmark bail reform legislation and state financing for a $1.4 billion Buffalo Bills stadium, infuriated progressive lawmakers and delayed its passage. Leaders from the state Senate and the state Assembly skipped the governor’s announcement.

Some real estate leaders won’t be too happy with the budget either after a tax abatement that spurred affordable housing development was chopped. But hundreds of millions of dollars for tenants struggling to pay rent were included as well as new funding for childcare, a gas tax reprieve, casino licenses, and a three-year law allowing restaurants to serve take-out cocktails, as long as customers buy food too.

“First round for the LCA,” Hochul said, referring to the reporters who cover the State Capitol.

The budget’s most prominent inclusion won’t cost the state any money but involves a rollback of bail revisions that had ended cash bail for nonviolent felonies and minor crimes. Judges will now be able to set bail for a greater number of felonies and misdemeanors and hold repeat offenders in jail before their trial starts.

The Buffalo Bills stadium scored $600 million in state financing, as well as contributions from Erie County and casino revenues from the Seneca Nation of Native Americans, as one of the last outstanding issues in the budget.

Less controversial was the insertion of $800 million for the state’s depleted emergency rental assistance program (ERAP), which will help tenants behind on their rental payments because of pandemic-related job losses. The state is also allocating $7 billion in child care subsidies over four years, although undocumented New Yorkers won’t be able to access the pot of funds.

Drivers who experienced sticker shock at the pump in recent weeks will have a temporary gas tax reprieve. Hochul also kept her promise to legalize to-go alcoholic drinks from restaurants after the executive order that was issued at the start of the pandemic ended last June.

Housing legislation will likely dominate the second half of the legislative calendar after several measures were scrapped in the waning days of negotiations.

Developers banking on a lucrative tax break that would make it easier for them to build below-market rate housing throughout the city will have to wait another day after a revision of the abatement, known as 421a, was pulled from the budget.

Hochul had proposed an update to the law, called 485w, but some lawmakers want to end the 421a abatement permanently when it expires on June 15. That proposal as well as good cause eviction will continue to be debated in the coming months.

Mayor Eric Adams will have to increase his presence in Albany too after lawmakers left mayoral control of schools out of the budget. (Adams had also backed 421a’s renewal.)

And criminal justice advocates have already vowed to push to pass the Clean Slate Act, which would automatically seal conviction records of people with misdemeanors after three years and felonies after seven years.