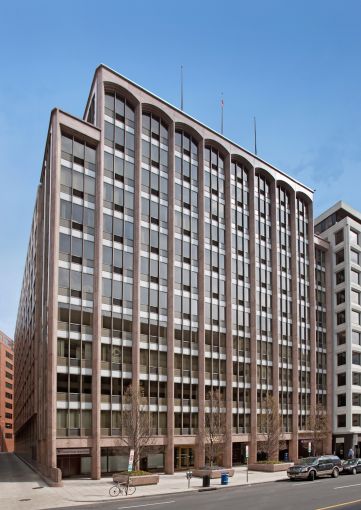 Washington, D.C. is experiencing historic, all-time highs in office vacancy, while experiencing an ongoing housing shortage. That has led developers and city officials to consider ways to make it easier to convert office properties to much-needed apartments.

At the end of 2021, the city’s office vacancy stood at 18.5 percent, a sharp increase from five years ago, when total vacancy was 11.5 percent, according to data from JLL.

We’re already seeing a wave of office-to-residential conversions throughout the District, as well as in the surrounding cities and suburbs. But in Downtown D.C., where vacancy is higher according to JLL, it’s difficult to convert offices to residential because of existing zoning codes.

The average age of buildings in the East End and Central Business District is 37 years and 45 years, respectively. Moving forward, as these buildings face increased competition from new space, many will face challenges retaining tenants or backfilling tenants after a relocation, resulting in buildings or even full blocks that lack occupancy, daytime traffic or demand for street-level retail.

“The opportunity to convert these buildings to multi-housing could potentially reap several benefits, including revitalizing neighborhoods and addressing the need for more housing, including affordable housing units,” Michael Hartnett, senior research director of the mid-Atlantic for JLL, told Commercial Observer.

In contrast to office, housing is facing an undersupply, and initial concerns that the pandemic would drive urban populations to the suburbs never materialized. Absorption of Class A apartment units in the Washington metro area was 16,310 units in 2021, bringing vacancy to 3.4 percent at year end, according to a recent report by Delta Associates.

In response, D.C. Mayor Muriel Bowser has unveiled a plan to incentivize office-to-residential conversions Downtown, though at the moment it remains in the exploratory stage. The mayor has put out a  request for information (RFI) on housing options in downtown D.C., asking property owners what they would need to consider transforming office structures into residences.

Anita Cozart, interim director of D.C.’s Office of Planning, spoke about the importance of the proposal, in an interview with Commercial Observer earlier this year.

“The downtown core of the District for a long time has been single-use [office space]. And over several years, we’ve been trying to introduce other uses, so that the downtown could have more vibrancy,” she said at the time. “Through a lot of collaboration with some of the organizations that represent Downtown interests and community groups, [we’ve been] thinking through what are thoughtful approaches to encouraging this kind of transformation to include other uses that complement office.”

“Trends are changing and people want to live and work close to each other,” Agouridis said. “COVID has accelerated the trend of working from home and pointed out potential weaknesses of an office-only environment. People stayed where they lived and didn’t come Downtown and weren’t there to support the retail and services, which suffered a lot.”

Matt Pacinelli, managing director for Stream Realty Partners’ D.C. office, noted there’s clearly a shortage of housing in the District, and the idea of creating mixed-use neighborhoods is valuable and creates a synergy that benefits all parties.

However, regulatory challenges have long made it difficult for such conversions to happen.

“Historically, there’s been a substantial gap in valuation for an office site versus a residential one,” he told CO. “Unless you can acquire one at a very attractive basis, you would not be in a strong position to generate a good return with a conversion.”

With the submissions for the RFI due to the mayor last month, Pacinelli is interested to hear the feedback and what the next steps are to incentivize developers and help make these conversions more likely — especially where affordable housing is concerned.

“There is a desire among developers to deliver affordable housing, but at the same time, they need a reasonable return on their investment, and at the moment, there isn’t a clear path to be able to do that,” he said. “These are the right conversations that the city is having and ultimately I hope they find solutions that work for all stakeholders.”

That said, many conversions are already underway, including some Downtown. There is currently 2 million square feet of office-to-residential conversion happening in D.C. proper, Pacinelli noted, and he expects there will be a handful more.

For instance, in January, a joint venture between Lincoln Property Company and Cadillac Fairview Corp., acquired the former Department of Homeland Security office at 1125 15th Street NWDowntown for $82 million, with plans to build a 264-unit residential building. Stream Realty was involved in the transaction as the seller’s agent.

Also Downtown, Foulger-Pratt is in the midst of its own office-to-residential conversion project, after acquiring a vacant office building at 1425 New York Avenue. NW for $56 million, and filing plans to convert the13-story building into 255 apartments.

Additionally, quite a few conversions are underway throughout the region. Earlier this month, Perseus TDC acquired a five-story, 65,000-square-foot office tower in Bethesda, Md. with plans to demolish and replace the building with a multifamily community.

“Northern Virginia has seen a boom in development over the past few years, and an exponential set of starts since the announcement of both Amazon HQ2 and the Virginia Tech Campus,” Gregg Hughes, senior vice president operations for Brookfield Properties Development in Washington, D.C., told CO.

Requests for comment from the mayor’s office were not immediately returned.