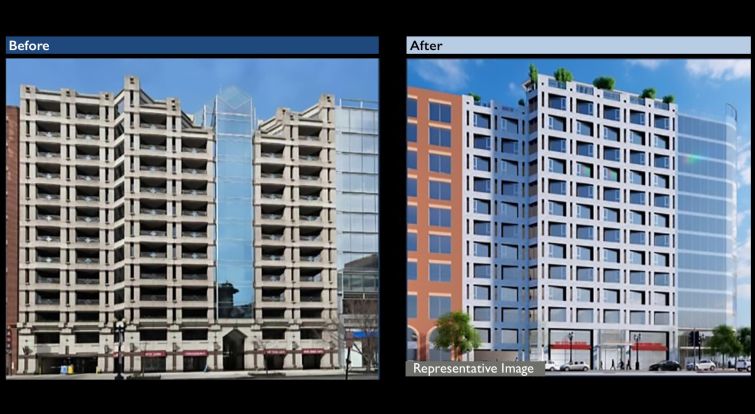 In what is now a persistent trend, Foulger-Pratt has scooped up a vacant Downtown Washington, D.C. office building with plans to transform it to housing, the company announced.

Foulger-Pratt paid $56 million for the 287,000-square-foot building at 1425 New York Avenue NW, formerly home to the Department of Justice, according to someone with knowledge of the deal. That’s up from the $47 million the seller, Monument Realty, paid for the property in early 2020.

At the time, the 13-story building, located close to the White House, was already vacant. The Department of Justice had occupied most of the building since the nineties, close to its headquarters at 950 Pennsylvania Avenue, but exited  in 2019, taking space in NoMa instead.

Foulger-Pratt plans to transform the property into 255 rental units across 285,000 square feet. The zoning and design is expected to be completed over the next 10 to 12 months.

“This is a rare opportunity and to be able to acquire the building at a cost-basis that makes economic sense to make the conversion is really an exciting thing for us,” Joe Clauser, Foulger-Pratt’s vice president, told Commercial Observer. “We see a lot of reasons to make the conversion, starting with the fact the economics are simply better to convert to multifamily as opposed to trying to slug it out to find a tenant to lease it as office.”

He cites the difference in cap rates between multifamily and office right now as being another big plus.

“With multifamily, we can control the timeline as its by-right zoning so we can have a shovel in the ground in a year,” Clauser said. “The construction timeline is significantly truncated from a normal ground-up development project.”

This is one of several office-to-housing conversions happening in D.C., as the city faces a glut of office vacancies while demand for housing has rebounded. But not all office properties are right for conversions. The New York Avenue building features floor plates with window heights that make sense for residential conversion, according to the company’s announcement.

“This is one of the few opportunities that CrowdStreet has opened to investors this early in the process,” Clauser said.  “It’s a testament to the sponsorship and location. There’s 50 million square feet of office in a half-mile radius but only about 1,000 Class A residential units. For people who want to live close to their office, and around the White House, there are just not a lot of options.”