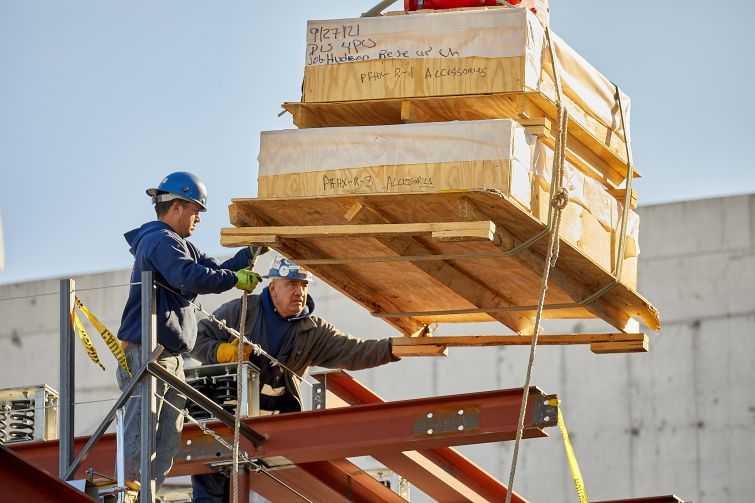 Air source heat pumps (ASHP) have been around for decades, but the skyrocketing cost of oil and gas, along with the impending demands of New York City’s Local Law 97 (LL97), have made the technology more intriguing for some owners and developers.

While ASHP technology remains expensive to install in new buildings, and even more so in retrofits, the energy demands of properties housing tenants such as life sciences laboratories, can make ASHP a desirable choice for owners.

In addition, real estate investors — more than ever keen on making environmental, social and governance (ESG) improvements — are seeing ASHP buildings as increasing in value over time.

One example of putting ASHP to use in an existing building can be found at Silverstein Properties and Taconic Partners’ Hudson Research Center, a 320,000-square-foot, mixed-use life sciences lab and office complex at 619 West 54th Street in Manhattan, where the largest such pump in New York City is being installed on the building’s roof. The installation began in November 2021 and is expected to be completed in May. 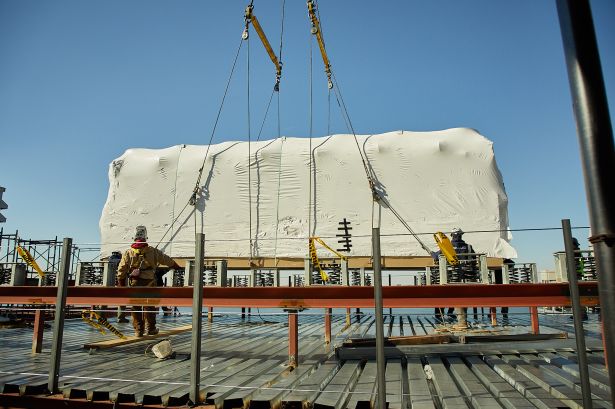 The building’s owners are expecting that ASHP will produce advanced heat recovery and reduce the building’s overall energy consumption, helping it meet Local Law 97’s fossil fuel-reduction requirements, while supporting the developers’ commitments to sustainability, said Anthony Montalto, a mechanical engineer and a partner at Jaros, Baum & Bolles (JB&B), a Manhattan-based engineering firm that designs ASHPs and is the mechanical, electrical and plumbing (MEP) engineer for the Hudson Research Center.

“Traditional commercial office buildings within New York City have been heated by the use of gas-fired boilers,” Montalto said. “They take gas inside the boiler, and create either steam or hot water to heat the building. Knowing where legislation is heading on the state level and city level in regards to reducing the amount of carbon emission — and gas, as we know, is a high contributor toward carbon emission — the pivot in the city and the designing of new buildings has been towards building electrification. Instead of using gas to heat buildings, we’re looking to use electricity to heat buildings through the use of air source heat pumps.”

ASHPs use electricity to either pull heat from the outdoors, or discharge heat to the outdoors, providing heating or cooling within buildings, Montalto explained. Once electricity provides power to an ASHP, that pump uses the building’s refrigeration cycle to produce hot water to heat buildings. The technology is increasingly in demand by large commercial office towers, as well as in life sciences and health care facilities, Montalto said.

Value-conscious investors are driving the demand, too, never mind the escalating costs of oil and gas.

“Investors in building assets really want to focus on ESG and make sure the asset has the right ESG goals in mind,” Montalto said, “and that it’s thoughtful in terms of whether or not they sell the asset in 10 years, and that there’s no issue in terms of it being an energy hog or emitting too much carbon emissions into the atmosphere. So the two big things are legislation that’s been pushing us towards people thinking about it more and ESG in terms of investment.”

JB&B is seeing growing demand for ASHP design and installation in new, million-plus-square-foot buildings, he added.

Another developer focused on reducing carbon emissions is Vornado Realty Trust, which has stated its intention to make all-electric systems in its new buildings in the Penn District, including planned supertall 15PENN.

The move toward ASHP use is not limited to commercial real estate buildings. The New York City Housing Authority (NYCHA), the largest public housing agency in the country, signaled its move toward the technology in its sustainability agenda.

“NYCHA is using a design-build contracting approach to upgrade the heating systems at eight developments [to implement] beneficial electrification technologies, such as air source heat pumps (ASHP) and air-water heat pumps (AWHP),” according to the sustainability agenda. The goal is to demonstrate that the ASHP projects will “outperform the LL97’s 2024 GHG [GreenHouse Gas] emissions goal of 6.75 [metric tons of carbon dioxide equivalent] as a minimum requirement.”

There are some roadblocks to greater adoption of ASHP, though.

“The big thing to keep in mind is that right now the grid in New York state is relatively dirty,” Montaltos said. “It’s coming from fuel-burning plants and whatnot. There are plans at the state level and contracts in place to green the grid for the use of wind and solar over time so that you’re getting your electrical source from renewable energies. We’re still a little ways away from that happening, but many developers and building owners want to position themselves for this transition to a more green grid. They’re going to utilize that green electricity to then heat the buildings in lieu of using gas.”

Although the process of greening the electrical grid may take a while, the other side of the clean energy conversion journey is the increasingly severe carbon emission caps that are scheduled to take effect.

“There are a series of state-level contracts that were put in place to get wind and solar online, but that looks at least 10 years out before you start seeing some major contribution to the grid being green,” Montalto said. “With Local Law 97, even though the law goes into effect in 2024, the carbon emission caps are honestly not that bad [at that point].

“But, every five years, the caps ratchet down, so many of the existing and new buildings we’re designing have to be in line when those caps are really reduced to a lower point.”