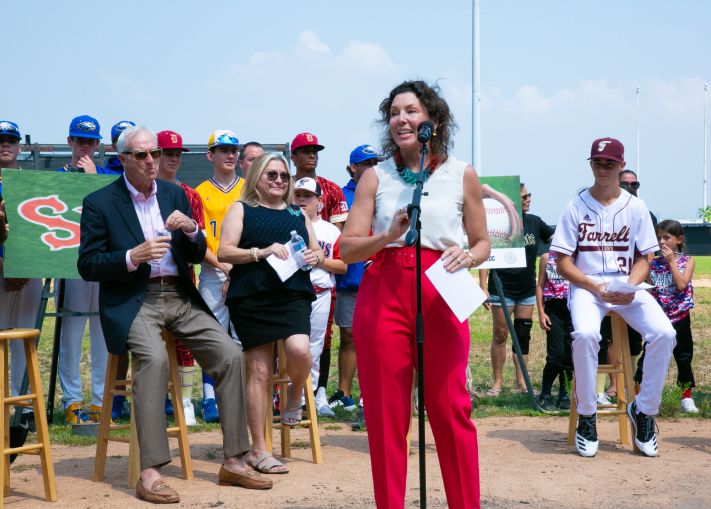 The New York City Economic Development Corporation (EDC) — the city’s arm for managing its 66 million square feet of property — is losing its leader, Rachel Loeb. And the rumors are flying about her replacement.

Loeb, who took over from James Patchett after he left the EDC in February 2021, has continued to lead the public-private partnership as Mayor Eric Adams searches for its new president and CEO — which has proven to be a challenge.

Adams’ top pick for the post, Carlo Scissura, reportedly tried to push private property deals with city offices through, without registering as a lobbyist, according to THE CITY. Next in line could be Industry City CEO Andrew Kimball, though the city has not announced his appointment, and Loeb declined to talk about her successor.

Loeb has worked at the EDC since 2018, when she joined the nonprofit as COO, overseeing the organization’s real estate, asset management and neighborhood planning initiatives. Two of her biggest projects were an assembly and maintenance site for wind turbines at the South Brooklyn Marine Terminal and partnering with Steiner Studios to develop a television and production hub in Sunset Park, Brooklyn.

Patchett said he hopes that whoever takes over from her knows New York City well, and capitalizes on the opportunity to make the EDC into a world-leader in pandemic response and public health.

In an interview with Commercial Observer, Loeb echoed that sentiment and shared her reflections and hopes for the city’s billion-dollar economic engine.

Why did you first get into development and real estate?

I was a lover of history [and an Asian studies minor], and after college like many history majors who don’t know what they are going to do with themselves, I went backpacking in Asia. And it was through those adventures that I fell in love with cities in a new way. I was asking myself questions about why all these cities were organized differently, and what were the decisions behind that? And that’s what led me to the discovery of urban planning as a field.

Why did you decide to join the EDC?

I’d always heard about and been enamored with what EDC does, and the unique organization that it is.

EDC was looking for someone at a senior level that had the experiences I had, and it was the right place at the right time.

What do you consider your biggest accomplishment in your role as COO?

One thing that I feel proud about [bringing] to these incredibly dedicated, incredibly smart public-service professionals and stewards was a private sector perspective. … I reorganized the asset management division, which had actually been broken into two divisions, and brought those together so that we could better manage the 66 million square feet that we manage on behalf of the city of New York.

Tell me about your role in the South Brooklyn Marine Terminal project for the wind industry. How will it contribute to the city, and what was its climate impact?

What the offshore wind industry presented us was not only an opportunity to address the issues of climate change and diversify our grid, but also to ask key questions. What would you do if you could introduce a brand new industry to New York City, if you had the opportunity to do that from the ground up? How do we make sure that all New Yorkers participate in this new economy? How do we look at workforce training programs so people know that there are jobs in the offshore wind industry?

Finally, we’re looking at thousands and thousands of jobs. How do we put a specific New York stamp on this, so that we can take advantage of New York’s incredible location on the water and build a new economy that’s going to bleed into and create other opportunities around clean tech? We see this [project] as a first move into greater opportunities around the green economy.

What has the EDC’s role been in the pandemic?

When the city needed PPE [personal protective equipment] we found out how to procure it. When the city needed to dredge the Hudson so the U.S.S. Comfort could come in, we did that in seven days. When they needed ventilators, we figured that out with our partners in other agencies. Time and time again, EDC stepped up to figure things out.

[The pandemic] showed us a couple of things. If we don’t have public health we won’t have economic health. We need to be prepared because our economy cannot suffer another shock like this.

Is there anything besides the pandemic that EDC needs to pay particular attention to in this new administration and into the recovery?

Now the question is, if the worst is behind us, what kind of recovery does the city want to have?

There are a few things that really have to be addressed; the quality of life issues that are being talked about are really important — that the city is clean and safe, making sure that people feel good and excited in their city. And I think [that] they do.

The questions that need to be asked [are], what does the recovery look like? How do you address unemployment? Do you care about just reducing that number or do you care about really making sure that everybody’s participating? Some of those jobs that were lost in the pandemic may or may not come back, and how do we make sure that everybody can participate in the workforce? Those are the hard questions. Making sure that our economy is diverse, inclusive, and resilient is a big challenge, but I think it can get done.

What would you want a new leader of the EDC to focus on?

The secret sauce at the EDC is the talent and the people who work here. They are some of the most creative, problem-solving, innovative public servants I have come across. There is no shortage of ideas. One thing I would say is you’ve got incredible, dedicated, creative people who are ready to do hard things on behalf of the city.

What’s next for you?

I am really excited to think about all the opportunities that are ahead of me. It’s been a long two years. I am going to take a little bit of time and think about what’s next. When I have something to share, I will be excited to share with you.