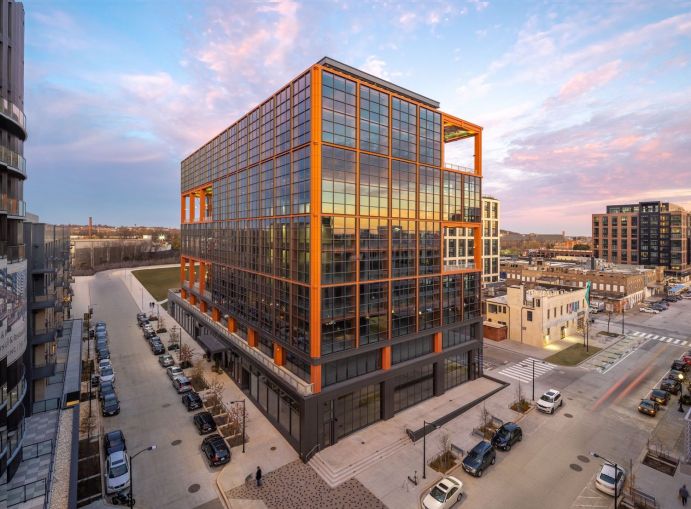 Social media giant TikTok, the community development nonprofit NeighborWorks America and flexible office company Industrious have all signed office leases for a total of 135,000 square feet. In addition, STARR Restaurant Group, owner of the popular D.C. eatery Le Diplomat, will be bringing in a new dining concept as part of the development’s retail component.

“From its creative design to the robust indoor and outdoor amenities combined with a truly spectacular rooftop offering, Signal House more than meets tenant expectations — especially in a post-COVID environment,” Jackson Prentice, Carr Properties’ senior vice president of portfolio management, told Commercial Observer. “The caliber of these customers and their long-term commitment to Signal House substantiates the project as a marquee office building in Washington, D.C.”

TikTok inked a 10-year, 50,000-square-foot lease and will occupy the second and third floors, plus part of the ground floor of the building.

NeighborWorks America signed for 48,000 square feet of space and will occupy the fifth and sixth floors. Industrious’s lease is for 25,000 square feet and it will operate on the seventh floor of the building.

“We were looking for a space to allow us to support our hybrid workspace and allow us to remain good stewards of the funds entrusted to us to operate,” Tayna Frett, senior vice president of administrative services at NeighborWorks America, told CO. “After looking at several spaces, we decided on the one that addressed our needs. This building was interesting based on the attractive terms of the lease, the LEED certification and our ability to build to suit our needs.”

The company’s current lease was ending, she explained, which resulted in an internal process that allowed it to reevaluate its space planning needs while evaluating what the current commercial market has available.

“We are currently exploring floor plans based on the needs of our workforce — a combination of individual work spaces supporting focused work, and group workspaces supporting innovation and collaboration,” Frett said. “We also want to include more formal meeting space.”

STARR Restaurant Group will occupy the entire south bay ground-floor retail space, which opens to a patio alongside Morse Street. Although the restaurant concept has yet to be revealed, owner Stephen Starr has said his new restaurant would open in the first quarter of 2023.

“We are incredibly excited to be opening another restaurant in the thriving Union Market District,” said Starr, who also owns St. Anselm in the area. “Signal House is an extraordinary property and will perfectly showcase a unique STARR concept. We are thrilled to be a part of the continued growth of the neighborhood and give diners something to look forward to.”

Requests for comment from the brokers and other parties involved were not immediately returned.