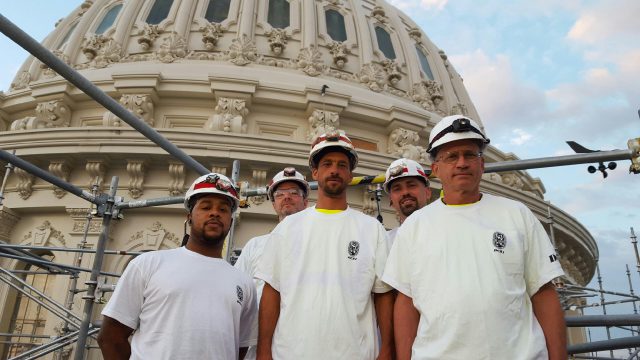 EverGreene team outside of the US Capitol. Photo: EverGreene

EverGreene Architectural Arts, one of the largest specialty contractors in the country, known for restoring the Empire State Building’s ceilings and the Rainbow Room at Rockefeller Center, suddenly lost its long-term president last week, in a move that has left staffers shocked, Commercial Observer has learned.

Employees were sent an email from Chairman Jeff Greene late on Jan. 12 that Alan Weiner, who worked at EverGreene for nearly 15 years and served as COO and president for nearly five years, and the firm’s board of directors “parted ways effective immediately” with no further details given, according to a source who has viewed the email.

Mark Rabinowitz, an executive vice president at EverGreene, was tapped as interim president to replace Weiner until the firm finds a permanent successor, the source added.

“People were really shocked. Alan Weiner was a strong leader,” said the source, who requested anonymity for fear of losing their job. “He wasn’t the type of leader that’s going to be your best friend, but he definitely did a great job for the company leading us into the next level.”

A spokesperson for EverGreene did not provide details on why Weiner left, but Greene said in a statement that it made “leadership changes that we believe serve the best interest of our vision for the future.”

“We have learned firsthand that disruption can be a huge catalyst for driving advancement and innovation,” Greene added. “This shift in ownership is an important milestone in our company’s history and our commitment to the next generation is stronger than ever. Our dream is to continue to be recognized as the standard for creating, preserving, and enhancing architectural arts, artifacts and the built environment in perpetuity.”

The Brooklyn-based EverGreene has won numerous awards for its work at spots around the city, including The Church of the Ascension and The Church of St. Francis Xavier. It has also worked on the Curran Theatre in San Francisco.

Aside from its Industry City headquarters, the firm has offices in Chicago, Los Angeles and San Francisco and in 2018 bought heritage preservation firm Conservation Solutions Inc., as CO has reported.

Weiner was elevated to president of the firm, taking over from the founder, Greene, several years ago to instill more of a “corporate structure” for its nearly 100 staffers to grow into, the source said. Internally, he seemed to be succeeding.

He boosted the company’s profitability in recent years, even notching its most profitable year in 2021 despite a global pandemic, so his sudden departure has left employees “surprised,” the source said. Senior management has not addressed staff as to the reasons for Weiner’s departure and the email was scant on details.

Despite the upheaval and the frustrations surrounding the lack of motive for the change in leadership, the source said staffers have been excited about Rabinowitz stepping into the post because he has plenty of experience in EverGreene’s niche field.

“It’s almost like a new breath has been breathed into EverGreene,” the source said. “The company is going to be very different.”