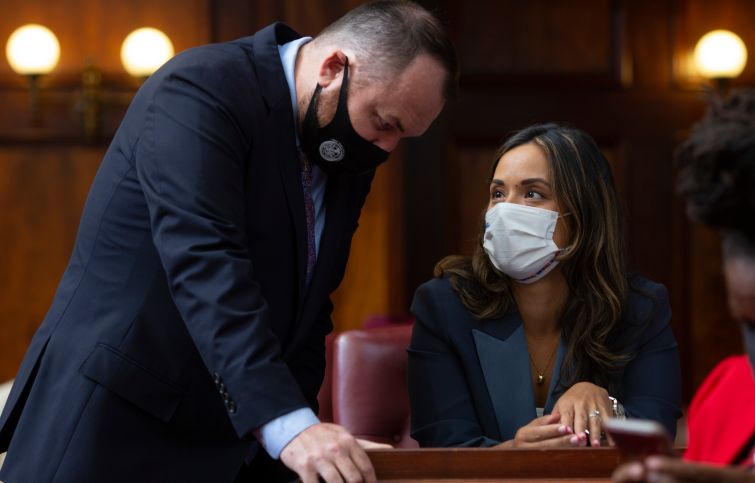 Mayor Bill de Blasio’s final rezoning of his eight-year tenure passed in the New York City Council on Wednesday, a week after last-minute changes were made by elected officials representing SoHo and NoHo — and after the plan survived vocal opposition and a lawsuit.

The plan, first introduced in January 2019, is intended to spark more residential development, altering zoning rules that date from the 1960s and paving the way for up to 3,200 apartments. However, some long-time residents of the two neighborhoods have staunchly opposed the rezoning.

Whether or not affordable housing would be generated at all was in question throughout the public review process, which also saw an unsuccessful lawsuit against the city over the use of Zoom meetings to gauge community support. Concerns ranged from possible threats to historic corridors to the prevalence of big-box retailers in the near future.

Council members Carlina Rivera and Margaret Chin announced before the vote that commercial floor area ratio (FAR) allotted to developers will remain mostly unchanged, while the residential FAR would greatly expand SoHo and NoHo to possibly create between 621 and 940 affordable units in the traditionally upper-class enclave.

Carlos Menchaca and Ben Kallos, two council members who railed against the passage of a rezoning last month for the New York Blood Center‘s expansion, stood together in their opposition to the passage of the Lower Manhattan rezoning.

In those units, households making $41,000 a year will qualify to live in what de Blasio says is the most “privileged” enclave in the city.

“With this project, we held one clear goal above all others — our North Star if you will — that goal was to incentivize the creation of affordable housing at income levels where it is desperately needed,” Rivera said prior to the vote. “And as a result today, we will pass a rational framework for housing generation and retail operation in a high-value, transit-rich neighborhood.

“The finished product is not perfect. It cannot be because the underlying mechanisms of affordability are themselves imperfect,” Rivera added. “But we embarked on a rigorous process of negotiations and reviews so that we could do our best by our communities.”

Housing advocates, however, have adopted the cause of rezoning SoHo and NoHo, reinforcing the administration’s claim that the two neighborhoods have only contributed to gentrification throughout the city by resisting the proliferation of new developments with affordable housing.

Creating affordable housing has consistently been my top priority for the 12 years I’ve served as a City Council Member. NYC is experiencing a housing crisis, and I believe that we have a duty to do what is right for our city, not just what is convenient for our politics. pic.twitter.com/wZubwx3YKe

SoHo and NoHo are currently designated as a 5 FAR for the most part, meaning developers are allowed to build five times the lot size for commercial space. The City Planning Commission’s original proposal called for the neighborhoods to be branded between 6 and 10 FAR, but the council’s proposal keeps the commercial FAR at 5.

“This is a big deal and part of why this happened is because of something we got done in our first term of this administration: mandatory inclusionary housing… That’s playing a big role here,” de Blasio said. “But there’s also a lot of smart actions in this rezoning to protect the community, the historical nature of the community, to create a balance.”

After the Subcommittee on Zoning and Franchises adopted its amendments to the bill last week, only one section of the area will see an increase in its commercial FAR: the NoHo Bowery Corridor, which will go to 7 FAR, a compromise from the DCP’s original plan to designate it a 10 FAR zone.

“We were able to make housing the best possible development option, eliminated dorm and college university usage, created a fund for local arts and another for housing creation and preservation,” Rivera said.

De Blasio is expected to sign the bill before leaving office at the end of the month. Since taking office in 2014, de Blasio has passed a number of rezonings that include the Inwood Neighborhood Plan and most recently Gowanus, Brooklyn, which has been spearheaded by Council member Brad Lander.

A changed Gowanus will allow for residential development along an environmentally revitalized Gowanus Canal, long-reviled for its polluted waters.