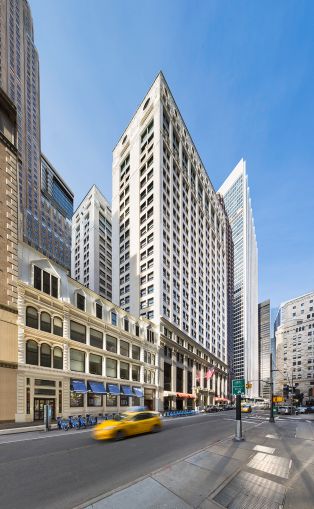 The commercial mortgage-backed securities (CMBS) financing retired about $250 million in existing debt that had been supplied by Invesco Real Estate to refinance the roughly 612,000-square-foot office property in 2018, as CO reported at the time.

Newmark’s vice chairmen and co-heads of debt structured finance, Dustin Stolly and Jordan Roeschlaub, led the arrangement of the financing, alongside Chris Kramer, Nick Scribani, Eden Abraham and Jake Neeb. Stolly and Roeschlaub’s team handledthe financing arrangement on the property in 2018 as well.

“Executing on an office financing at this stage in the pandemic is a testament to the sponsorship associated with the transaction,” Stolly said in a statement. “Each member of the sponsorship is best in class.”

Normandy had picked up a controlling stake in 80-90 Maiden Lane in 2014 from Chetrit Group and Read Property Group in an off-market deal. Three years later, Normandy decided to up its interest in the assets for a $54 million price tag,The Real Deal reported.

The site features two contiguous office properties that are located between Pearl and William streets. Built in 1912, 80 Maiden Lane stands at 25 stories, and 90 Maiden Lane is a much smaller, four-story asset that was constructed in 1900.

Since 2012, the property has had a number of improvements made to it, including lobby, facade, common area, retail space renovations and modifications to the buildings’ elevators, according to Newmark, which indicated that this new financing from JPMorgan will facilitate more work to the assets. The borrowers are aiming at including an amenity center and a bike room, as well as pre-built suites, Newmark said.

“The sponsorship team has undertaken important steps toward realizing the assets’ potential, and the property is well positioned to realize stabilization in the post-pandemic world,” Roeschlaub said.

An official at Meadow Partners declined to comment, as did a representative for JPMorgan.