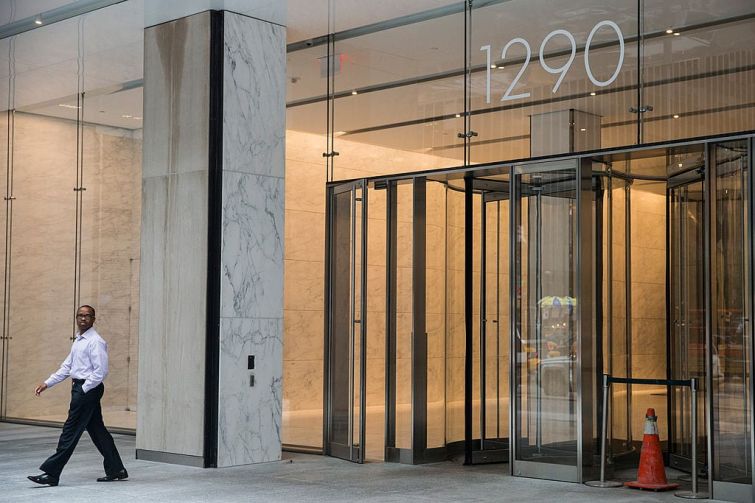 JPMorgan Chase, Citigroup, Goldman Sachs and Bank of Montreal have  teamed up to originate $950 million in debt to refinance Vornado Realty Trust and Donald Trump’s Midtown skyscraper at 1290 Avenue of the Americas, according to ratings agency analysis of the deal.

Months after Vornado reportedly wanted to buy out Trump’s 30 percent stake in the 43-story asset, following the the end of his presidency and the Jan. 6 insurrection attempt, the pair have nabbed a long-awaited refinancing, Bloomberg reported, citing recently released data from Kroll Bond Rating Agency (KBRA).

JPMorgan Chase took down roughly $475 million, or half, of the commercial mortgage-backed securities (CMBS) loan, while Citi Real Estate Funding and Goldman Sachs each originated 20 percent of the total and Bank of Montreal supplied the remaining 10 percent, according to KBRA. The deal is expected to close on Nov. 17.

The CMBS loan, along with $61.6 million in equity from the sponsors, took out $950 million in existing balance sheet debt that was held by Wells Fargo, according to KBRA. The Class A asset once collateralized an older, $950 million CMBS single-borrower securitization from 2012 — VNDO 2012- 6AVE — but that debt was later refinanced out of CMBS by Wells Fargo’s balance sheet loan, per KBRA.

This is the second office skyscraper Vornado and Trump have refinanced in the last several months, having previously nabbed a $1.2 billion loan on the 55-story tower at 55 California Street in San Francisco in a deal that was also led by JPMorgan. Vornado and Trump were able to recoup about $617 million in equity in that deal, providing some liquidity against Trump’s mounting debt burden.

Trump holds 30 percent interests in both 1290 Avenue of the Americas and 555 California Street, which together represent about a third of his roughly $2.3 billion fortune, according to previous reporting from Bloomberg. Vornado controls the remaining 70 percent interests in both properties. The publicly-traded real estate investment trust run by Steven Roth bought 1290 Avenue of the Americas in 2007.

Built in 1963, the 2.1-million-square-foot Midtown tower — between West 51st and West 52nd Streets — has had about $270 million poured into it since 2010 for lobby and common area renovations, upgrades to the building and its mechanical systems, as well as for leasing and tenant improvements, per KBRA.

As of this month, the property is 98 percent leased out to a roster of 25 tenants. The largest tenant is AXA Equitable Life Insurance Company, which is housed in almost 23 percent of the building’s total square footage. Other tenants include investment management firm Neuberger Berman, global advisory company Cushman & Wakefield, international law firm Venable and Hachette Book Group Inc. These five companies make up almost 67 percent of base rent and take up about 65 percent of the asset’s total square footage, according to KBRA.

Last month, it was reported that Venable, which is headquartered in Washington, D.C., signed a deal to move out of 1290 Avenue of the Americas, with plans to shift its New York City operations over to 157,800 square feet at the Durst Organization’s One Five One — formerly the Condé Nast Building — at 151 West 42nd Street.