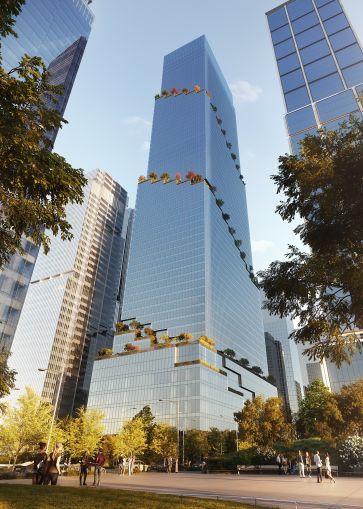 Turner Construction Company is relocating its global headquarters to 75,000 square feet at The Spiral, the 65-story tower it’s helping to build.

The building’s general contractor took the entire third floor of Tishman Speyer’s property at 66 Hudson Boulevard in a 13-year lease, the New York Post first reported. Asking rents at the tower range from $110 per square foot at the base to $225 a foot at the top.

“Turner has been an incredible partner as we built The Spiral, introducing technology, safety and workforce innovations that have made it a new standard for modern office development,” Rob Speyer, president and CEO of Tishman Speyer, said in a statement. “Given all of the office towers Turner is constructing around the world, we are very honored they have chosen The Spiral as their new home.”

A representative for Tishman Speyer declined to comment on whether Turner scored any concessions in the deal.

Turner plans to relocate from its current offices at 375 Hudson Street to the tower in January 2023, after The Spiral’s expected completion in the second half of 2022, according to Tishman Speyer.

Bjarke Ingels Group designed the 2.9 million-square-foot building between West 34th and West 35th streets, which features staggered landscaped terraces as it rises. Peter Davoren, president and CEO of Turner, said in a statement that the building’s sustainability was part of its draw.

“The Spiral, a project we are currently building, will provide us with an environment that so well defines our vision and the future of our company,” Davoren said in a statement. “The highly sustainable, technologically advanced building offers a range of people-focused amenities that will support the connectivity of our teams and offer a healthy environment for employees and guests.”

The 1,031-foot tall tower has previously signed deals with Pfizer, a biopharmaceutical company known for making one of the COVID-19 vaccines, to relocate its headquarters to 746,000 square feet and law firm Debevoise & Plimpton, which snagged 531,000 square feet.

AllianceBernstein has pre-leased 166,000 square feet at the building, less than the 189,000 square feet Tishman Speyer announced the investment management firm took in 2019, according to Tishman Speyer. A representative for the landlord said the financial company’s 20-year lease had some flexibility in how much space it would actually take in the end.