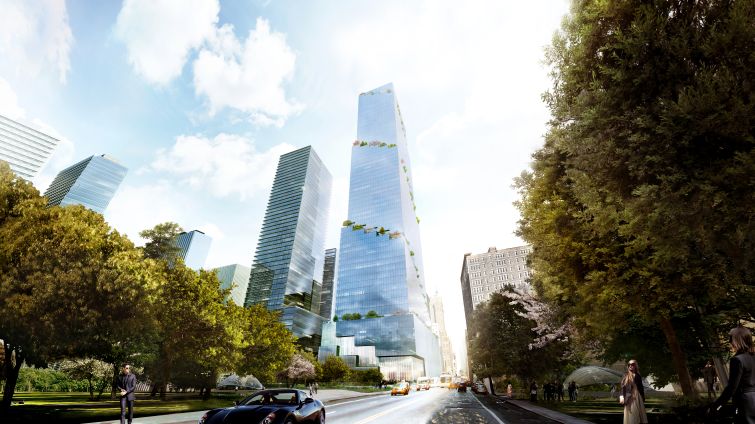 The publicly traded financial company signed a 20-year, 189,000-square-foot lease for the 25th through 28th floors of the 65-story office tower at 66 Hudson Boulevard, Tishman Speyer announced in a press release. AllianceBernstein will move into the 2.9-million-square-foot building between West 34th and West 35th Streets in January 2025. A Tishman spokesman declined to disclose asking rents.

The move comes after the company revealed last year that it would relocate its headquarters to Nashville, in an effort to cut costs. The firm, which manages nearly $550 billion in assets, is in the process of transferring 1,050 legal, finance and marketing jobs to the Tennessee capital. After the consolidation is complete, it will maintain a smaller New York City office with 850 employees, who will oversee a trading and portfolio management business, according to Crain’s New York Business, which broke the news about AllianceBernstein’s deal at the Spiral last month.

The 52-year-old asset manager has begun vacating its 992,00-square-foot headquarters at 1345 Avenue of the Americas in Midtown, where it renewed its lease in 2017. It has been slowly shrinking its footprint for a few years now at the Fisher Brothers-owned skyscraper between West 54th and West 55th Streets, per Crain’s. The paper also reported Bernstein had shortened its lease deal by five years, and its office lease is now expected to expire in 2024.

“We embarked on an extensive search to find the right space for AB,” Seth Bernstein, the president and CEO of AB, said in a statement. “We believe that The Spiral will help us to achieve a workplace that is equipped with collaborative tools, flexible open spaces, and state of the art staff amenities and innovative technology, all of which will help us to best serve our clients.”

Newmark Knight Frank’s Neil Goldmacher, Jared Horowitz and Brian Goldman repped AB in the deal and didn’t immediately respond to a request for comment made via a spokeswoman. Tishman handled the transaction in-house.

Pharmaceutical giant Pfizer nailed down 800,000 square feet at the Bjarke Ingels-designed Spiral last year after selling its East 42nd Street headquarters, as Commercial Observer reported at the time. Tishman Speyer expects to finish construction on the 1,031-foot-tall skyscraper in 2022.

Tishman President Rob Speyer said in prepared remarks he was “thrilled to welcome AllianceBernstein, which was attracted to The Spiral in part due to Bjarke Ingels’ unique and inspired design.”