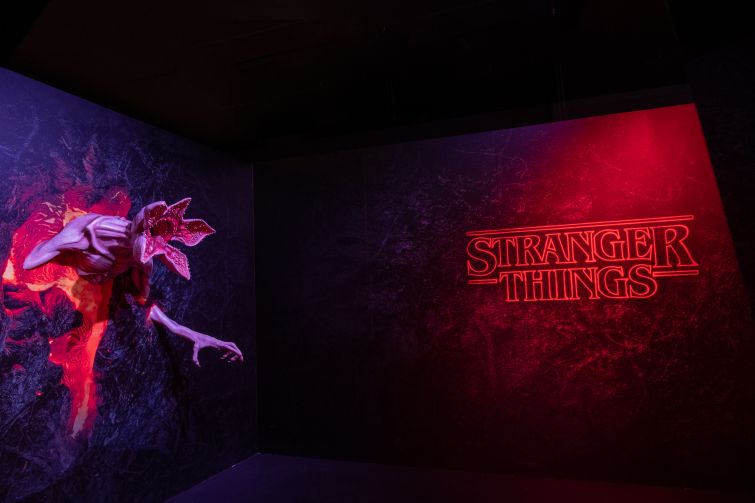 Netflix’s “Stranger Things” is turning its new space in the Theater District upside down.

Decked out in red neon lights, the pop-up for the Duffer brothers’ series opens on Saturday in 10,603 square feet at 5 Times Square. The Times Square tower’s landlord, RXR Realty, declined to comment on the asking rent of the short-term lease.

“This first-ever ‘Stranger Things’ store sends [visitors] right into the heart of Hawkins [fictional town], in a truly immersive retail experience, totally stoked with ’80s vibes and the chance to take home a piece of their favorite show with unique merchandise that isn’t available anywhere else,” Greg Lombardo, head of experiences at Netflix, which streams the series, said in a statement. “But be warned, you never know when things will turn Upside Down.” (Upside Down is an alternate dimension existing in parallel to the human world on the show.)

RXR and investor David Werner own 5 Times Square in a joint venture. E&Y anchors the tower, though the accounting giant plans to move to Manhattan West in 2022. It’s unclear how long the pop-up will stay in the 1 million-square-foot-plus tower, but entry is free and face masks are required, according to an announcement from the television giant.

West Coast fans of the 1980s serial drama will have a chance to check out the artwork, tchotchkes and more too. Netflix is opening another ‘Stranger Things’ pop-up shop in 7,500 square feet at the Los Angeles shopping mall The Americana at Brand, located at 889 Americana Way. The Glendale mall is owned by Caruso Affiliated, which handled the deal in-house and did not immediately respond to a request for comment.

The L.A. location will also open on Nov. 6, which Netflix has dubbed “Stranger Things Day” — when a central character from the show, Will Byers (Noah Schnapp) disappears, kicking off a trio of friends’ journey into their hometown’s dangerous secrets.

The two pop-ups are part of a wave of movie- and television-to-retail destinations. The city already holds the ‘Friends Experience’ — for the iconic television series Friends — at 130 East 23rd Street —and a similar concept for wizard film and book series ‘Harry Potter’ dubbed Harry Potter New York at 935 Broadway.

Newmark’s Joshua Strauss and Scott Zinovoy handled the deal for Netflix in both the East and West coast locations. Alongside Strauss and Zinovoy, Newmark’s Karen Bellantoni represented RXR Realty in the transaction for 5 Times Square. The brokerage firm did not respond to a request for comment.