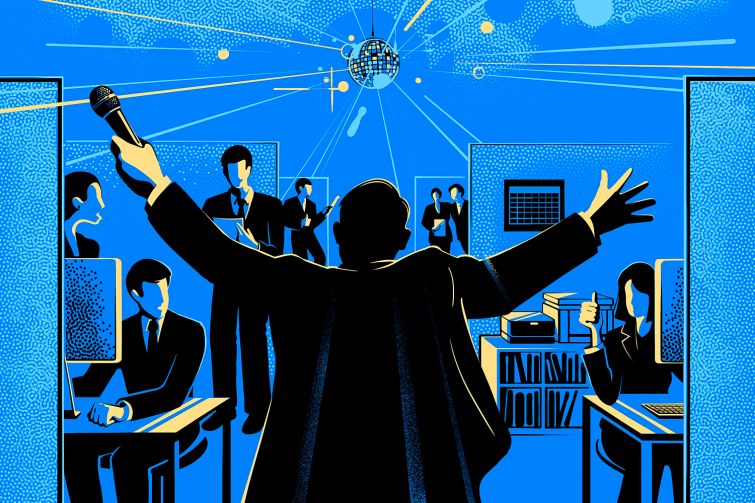 Some New York landlords are leaving nothing on the field when it comes to keeping their offices viable in the post-COVID world.

At 730 Third Avenue, a 27-story, 666,000-square-foot tower in the Grand Central Terminal district, owners Nuveen Real Estate, asset manager for financial services company TIAA, aren’t taking any chances. In addition to the Gensler-designed outdoor terraces and the food hall and the fitness center that are now de rigueur for Manhattan skyscrapers these days, they’re trying bees and golf.

“It’s about making tenants comfortable,“ said Brian Wallick, director of New York investments, office and life sciences, Americas, for Nuveen. “I think we were a little bit ahead of the curve with some of the amenities. We started talking about this in early 2019 when the redevelopment [of the building] started. And certainly with what’s gone on in the last one to two years, you need to have amenities in your building that excite people who are coming back to the office.”

There are two beehives on the seventh-floor terrace, offering a habitat for insects that pollinate surrounding plants, and produce honey that folks who work in the building can take home for free, and they are planning to incorporate some into the offerings in the food hall. There’s also a website, called myhive, that allows workers to follow the bees’ adventures.

As for golf, there’s a lounge where you can fire a real golf ball at a screen that will calculate its trajectory, and you can play a virtual round of golf. It will have two full-swing simulators, with the software licenses from Topgolf Swing Suite, according to a spokesperson for Nuveen.

Those are some of the sweeteners landlords and bosses are laying on thick to make sure their workers come back to the physical office, now that maybe some have learned the extent to which they can do their jobs remotely, either largely so or completely. Millions of dollars in rent are on the line as well as the traditional distinction between the workplace and the rest of peoples’ lives.

Besides golf and bees, among these more unusual amenities are karaoke nights, wine tastings and electric scooters.

The eight-story, 500,000 square-foot building at 25 Kent Avenue came online in late 2019 in the Williamsburg section of Brooklyn, featuring all kinds of bells and whistles — but coming as it did just as the COVID virus was taking hold and lockdowns became literally the order of the day.

Kayte Singleton, associate property manager at Philadelphia-based Rubenstein Partners, which owns the building, said 25 Kent was never going to just rely on the appeal it had to the tech-savvy folks who live near it, and that things like the fleet of scooters and the fitness center featuring the rock-climbing wall were planned before the virus came along. But the restrictions under which the entire commercial real estate world was forced to live gave the whole thing an extra level of urgency.

“It’s very, very important for people to be able to get out into the neighborhood and interact a bit,” Singleton said. “So we thought scooters were a fun, easy way to do that. About 75 percent of our tenants in the short period that it’s been [available] actually used them, so it’s been a hit so far.”

Same with the bouldering wall, a feature of the fitness center, part of the building’s health and wellness support apparatus, which includes places for meditation, not to mention showers and lockers, so people don’t have to bring their sweat into the workplace.

“We completed the building in 2019, and, then, shortly after, COVID hit,” Singleton said. “The fitness center was something that was not developed immediately. It was in the base building plans. That was something that we thought we needed. It was very very attractive to tenants. COVID came and we were under development, and we increased offerings in the fitness center. It really raised our focus on work-life balance.”

At the Huntington Beach, Calif., firm the Sommelier Co. — sommelier being a wine expert who conducts tastings — general manager Adam Edmonsond said the company has seen a surge in requests for live tastings. “For a whole year, all programs were virtual; now a reasonable percentage [about half] are in-person,” he said. “Companies are still being careful.”

Sommelier Co. is in 29 U.S. cities (if you regard California’s Orange County as a city), and another 18 foreign capitals.

“I have only had one or two companies tell me explicitly that they are having an in-person event in order to get employees back into the office, but I am sure many who are planning in-person ‘happy hour’ type events have that in mind,” Edmonsond said in an email. “I have had many express a sense of making up for lost time socializing with colleagues in person.”

This focus of companies on socialization and return to office is perhaps more acute in some areas than in others.

A report out in late October from VTS, a proptech firm that tracks office use and leasing interest, identified New York, Los Angeles and Chicago as “slightly more remote-friendly” than the U.S. overall, meaning they are slightly more dominated by jobs that can be done in places other than the workplace. San Francisco, San Jose, Washington and Boston were identified as the nation’s most remote-friendly cities — the first two hosting Silicon Valley, after all, and its spillover.

Anecdotally, VTS staff have seen a phenomenon called “bursts,” in which managers arrange for staff members to all come in on the same day “to create an environment with energy in the office,” Ryan Masiello, VTS’ co-founder and chief strategy officer, said over email.

Might karaoke generate that energy? In some cases, yes. The singalong setup is just one of the perks companies have been using to entice staff back to the office, said Rebecca Humphrey, head of the North American workplace strategy group for Savills, a real estate services firm whose North American unit concentrates on tenant representation. She said that Savills finds that corporate executives are just as committed to maximizing the use of their offices as landlords are.

“There certainly is a conversation around amenities right now,” she said. “It’s been around for a while, but COVID lit a fire around that conversation.”

This appeared as a feature in Commercial Observer’s Tenant Talk newsletter. To subscribe to it and other newsletters, click here.